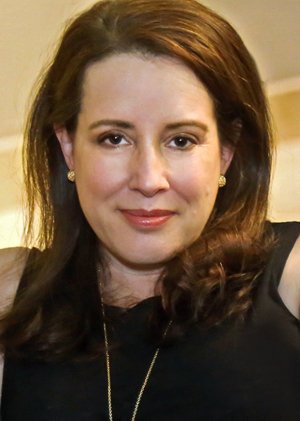 Julie Pottinger AB ’92 (pen name Julia Quinn) is a Seattle-based romance author of over three dozen books. She has written numerous bestsellers including the hit Bridgerton series that was adapted for television by Shondaland and has become a global phenomenon on Netflix. She has been inducted into the Romance Writers of America Hall of Fame. Her latest book, the graphic novel Miss Butterworth and the Mad Baron, was released on May 10 and is a collaboration with her late sister, artist and illustrator Violet Charles (aka Ariana Cotler). More information can be found on her website: https://juliaquinn.com

Q: This spring saw the season 2 launch of Bridgerton, the hit Netflix show based on your wildly popular book series. What degree of involvement have you had with the Netflix series, what have been some high points and challenges, and is there anything you wish you had known prior to embarking on this journey?

A: I am only minimally involved in the production. One of the first questions to come up in any negotiation involving the option of a novelist's work is, "Are you willing to give up creative control?" My answer was an enthusiastic, "YES!" This was in large part because Hollywood has not traditionally looked to romance novels for source material, and I was very aware that this was a once in a lifetime opportunity. I did not want to do anything to jeopardize the deal.

But it's also very easy to come to this decision when you have such unwavering trust in the people you're working with. I'm not going to tell Shonda Rhimes how to make television.

Q: You write primarily Regency-era fiction — what drew you to focus on this specific genre vs. modern romance or other historical periods?

A: Regency England has always been a very popular setting in the historical romance genre. It's far enough in the past that it's imbued with a fairytale-like quality in ways that something set in the 20th or 21st centuries can't be. But it's modern enough that I can make my characters think and act in ways that resonate with contemporary readers.

Q: Much has been made of the nontraditional, multiracial casting choices for the show, and you have spoken enthusiastically about this element of the adaptation — how much do you think this contributed to the success of the show in finding a wider audience?

A: I think it played a huge role. Bridgerton was revolutionary in the way it allowed so many people to see themselves in this type of story. I've heard from so many people who have said it was transformative, seeing "someone like them" in the fancy gown. Romance novels are all about happy endings, and I am so incredibly proud to be a part of a project that states quite clearly: "We all deserve happy endings."

Q: In the several decades since you began your career, have you seen a trend toward more inclusivity in the romance genre — both in terms of the authors (and editors/publishers) themselves and the kinds of characters and stories being elevated?

A: Yes. But while we are moving in the right direction, we still have a long way to go. I myself am guilty of not checking my own privilege for many years. It's really easy to be unaware of the struggles of others, especially if you yourself are working hard.

I get asked a lot if I plan to write novels with main characters from traditionally marginalized groups, and I'm just not sure. The most important thing to me is that if I do write about a culture very different from my own that I do it well, and in a way that is not inadvertently harmful. There is a big danger of perpetuating a stereotype I don't even know exists.

In the meantime, I've been trying to use my platform to shine a light on diverse authors. There are so many great romances being written by authors of color, or queer authors, or neurodiverse authors, or any of a host of groups who have not traditionally been given a seat at the publishing table. I feel honored to be able to introduce readers to any talented author.

Q: Your newest release is Miss Butterworth and the Mad Baron, a graphic novel that is a companion piece to the Bridgerton series. You wrote this book in collaboration with your late sister, the artist Violet Charles (aka Ariana Cotler), who created all of the illustrations and contributed significantly to the story itself. Can you tell us more about the genesis of the project, what it was like to work so closely with your sister, and what you hope audiences will take away from the book?

A: Miss Butterworth and the Mad Baron is a "book-within-the-book" that has existed within my fictional universe since I wrote It's in His Kiss in 2005. Lady Danbury is a bit older in the books than she is in the show, and her eyes are not what they used to be, so Hyacinth Bridgerton visits her every Tuesday to read to her from Butterworth. It's a poorly written, over-the-top Gothic novel, the sort that has a cliffhanger at the end of every chapter, usually with the heroine almost dying. I had so much fun with it that I brought it back for another book, and then another, and then eventually wrote one in which the hero is the secret author.

After several years, readers started asking me to write Butterworth in its entirety, which I was never going to do. It's incredibly fun to write snippets of bad writing, but an entire novel would be agony. My sister, however, was a cartoonist and illustrator, and at some point we realized it could make a spectacular graphic novel.

Writing with Aria was a gift. She was my half-sister and quite a bit younger than me. We didn't grow up together, so this was a truly unique and special bonding experience. She was someone who really struggled to find her place in life. Butterworth — and the entire experience of getting a book deal with a big New York publisher — was a big turning point for her. I can't believe that she's not here to see the book land in the hands of readers, but I take comfort in knowing that the whole world will get to see how brilliant and clever and funny she was.

Q: Miss Butterworth and the Mad Baron is dedicated to your father, children’s author and screenwriter Stephen Cotler (AB ’65, MBA ’68), who perished in the tragic accident that also took your sister’s life. You’ve said that your dad’s skepticism about your middle school reading choices (including the Sweet Valley High series) inspired your first effort as a teenage novelist. In what other ways did your dad influence your path as a writer?

A: First of all, I feel I need to point out that my father and sister were not killed in an accident. They were killed in an automobile crash caused by a drunk driver. A man made a decision to drink for two days straight on a drive from Idaho to Utah. His blood alcohol level was nearly three times the legal limit. There is nothing accidental about that.

But I'd rather focus on my father, and not on the man who killed him. My dad was a force of nature, and he inspired me every day to take chances and be creative. He was also always thrilled to be involved in my career, even in the tiniest of ways. Many years ago I needed to research the earliest known mention of the nursery rhyme character Little Bo Peep to make sure it was okay to mention the character in a book set in the 1820s. (Turns out it's Shakespeare, so I'm good.) But it was my dad who did the research for me. I was writing in Starbucks, back before they had free wifi, so I called him on my cell, and he did a web search for me. I told him I should put him on retainer, and he said, "Honey, I've been working for you since 1970."

If you'll indulge me, I'd like to share a paragraph that was edited out of the obituary that was sent to Harvard Magazine:

(Steve) took particular delight in being “the most embarrassing dad ever” and may have clinched this award in the late 70s with an appearance on the Gong Show. (He was gonged.) His daughter Julie ‘92, however, tells the story of when she finally stopped being embarrassed by her father: “It was his 25th reunion. I was a sophomore, so I stayed in Cambridge to attend the festivities with him. The entire class of ’65 had gone to a club in Boston for dancing, and Janet Jackson came on the speakers. My father started dancing very badly (typical) but with great enthusiasm (also typical). I saw a few teenagers pointing and snickering, and I thought, ‘Yeah, you WISH your dad danced like that.’ After that, I felt nothing but pride in his geekiness. He was willing to try almost anything, and he never let the fear of embarrassment rule his actions. As a friend said after his sudden death, ‘We should all be a little more Steve.’ ”

If anyone would like to read a little more about how my father has inspired me, I wrote an essay for the back matter of The Duke and I that tells a bit more of our tale.

Q: What are your favorite films, TV shows, and books (both recent and not-so-recent)?

A: I wouldn't know where to begin with such a question, so I'll just say that for Mother's Day, my son said, "Let's have an at-home double feature." I chose Hope and Glory (1987) and The Triplets of Belleville (2003).

A: With my family. It doesn't even matter what we're doing, as long as we're together.