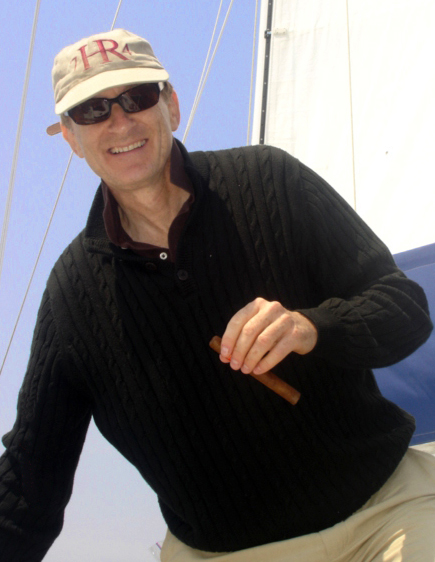 Jeff Sagansky was destined for Hollywood. “I was already reading Variety when I was in high school. By the time I got to Harvard, I knew I wanted to make TV shows and movies.

“There wasn’t much I could do as an undergraduate to get involved in the business. If Harvardwood had existed then, I definitely would have joined the campus chapter.” After graduating and trying without success to get a job in Hollywood, “I went to Harvard Business School hoping to make myself a more attractive hire.”

“I wanted to work at CBS because at the time it was the foremost network,” Jeff recalls. “But I couldn’t get a job in programming, so I joined CBS in New York as a financial analyst.

“Each morning I waited outside Alan Wagner’s office at CBS, hoping to meet him. Alan Wagner was the New York-based CBS programming executive who had overseen shows like All in the Family and Kojak. Finally, Alan agreed to give me scripts to read outside of work hours. I’d give him my synopses and comments, and he helped me understand the dynamics of why some scripts worked and others didn’t. That was my introduction to programming.”

After applying to NBC’s West Coast associates program, Jeff got his first programming job in Burbank. “I was a liaison between NBC programming and specific shows in production. I had to make sure each episode was delivered on schedule, that the right promotional material was available and most importantly that the show was produced creatively in the way NBC had ordered it. One of my shows was The Rockford Files, which was in its fourth year and was an established hit.

“I remember going in to see Meta Rosenberg for the first time to give her my voluminous notes. She was Jim Garner’s agent and The Rockford Files executive producer. The next week I came back and again, I had voluminous notes. She listened politely then took me aside and asked ‘How do you like your job?’ I said ‘I love it, it’s sort of a dream for me.’ ‘Well,’ she said, ‘if you want to keep it, you should do a lot more listening and a lot less talking. You don’t have to fix this show. Why don’t you just watch how it’s done and learn what makes a show successful?’ That was fantastic advice for the twenty-five-year-old me.”

Alan Wagner and Meta Rosenberg were but two of the people who imparted valuable advice to Jeff during his Hollywood career.

“I’ve had three great mentors, the producers David Gerber, Ray Stark and Grant Tinker. Not only did they teach me about the business, they taught me about being an effective executive and about life in general. I consider mentoring the next generation of executives to be one of the most important things that I do now.”

Jeff left NBC in 1979 to work at David Gerber’s production company, then went back to NBC three years later as senior vice president in charge of series programming. “We created Must See TV with shows like Cheers, Family Ties, The Cosby Show, The A Team, St. Elsewhere and Remington Steele, shows that people still watch in digital form. Two years after I returned, NBC became the number one network for the first time in a decade.

“I made it known I wanted to spread my wings a bit and in 1985 was offered the job of starting a new studio, Tri-Star Pictures. We made movies like Peggy Sue Got Married, Steel Magnolias and Glory.

“Glory was about Robert Gould Shaw and the men of the 54th Massachusetts Infantry Regiment. Robert Gould Shaw was a young officer who had studied at Harvard; the 54th Massachusetts Infantry Regiment was the first African-American regiment in the Civil War. I’d been fascinated by their story since I was sixteen or seventeen after seeing a Saint-Gaudens monument in Boston depicting their valor. It was kismet that I was in a position to greenlight Glory some twenty years later, and that it was directed by my college classmate Ed Zwick.”

“Working in the industry has been even better than I thought it would be back in my Harvard days. You’re helping very creative writers, producers and directors make great TV shows and movies by bringing whatever gifts you have. I don’t think there’s a more exciting thing to do in life.”

Hired as the president of CBS Entertainment in 1989, Jeff took the third-place network to first-place with such series as The Nanny, Chicago Hope, Picket Fences and Northern Exposure.

In a shift from his CBS programming role, Jeff then spent four years as co-president of Sony Pictures Entertainment, responsible for worldwide television operations and launching new television channels in Asia, Latin America and Central Europe. His final corporate role was at Paxson Communications where he launched the family-oriented PAX TV.

“In 2002 I decided to go out on my own. I partnered with Harry Sloan, the former Chair & CEO of MGM and Europe’s SBS Broadcasting. We both had been CEOs of public companies and knew the capital markets well, so we started creating special purpose acquisition companies, or SPACs. A SPAC is an alternative way to take a private company public. At first we thought we’d concentrate on media, but to date we’ve launched nine public companies ranging from media to industrials to biotech.

“Though I have less time to do it now, I’m still working with talented writers and creators. A lot of today’s great shows aren’t made in the U.S. or in English -- shows like Netflix’s Narcos, Fauda and a show I produced in India, Delhi Crime.

“Currently I’m developing shows in Hindi and Hebrew. For me, the business is as exciting now as when I first started.”

On June 2, NATPE will honor Jeff Sagansky with a Brandon Tartikoff Legacy Award for his “extraordinary passion, leadership, independence and vision in content programming.”