The Great LA River Clean Up / La Gran Limpieza is back! The largest urban River cleanup in America started April 2018. Last year, we mobilized 10,000 volunteers to remove 100 tons of trash. Located along the breathtaking Elysian Valley bike path, the Frog Spot is Friends of the Los Angeles River’s summer gateway to the L.A. River. The Frog Spot serves as a community gathering space, launch pad for River tours and trips, and an exciting performance venue. 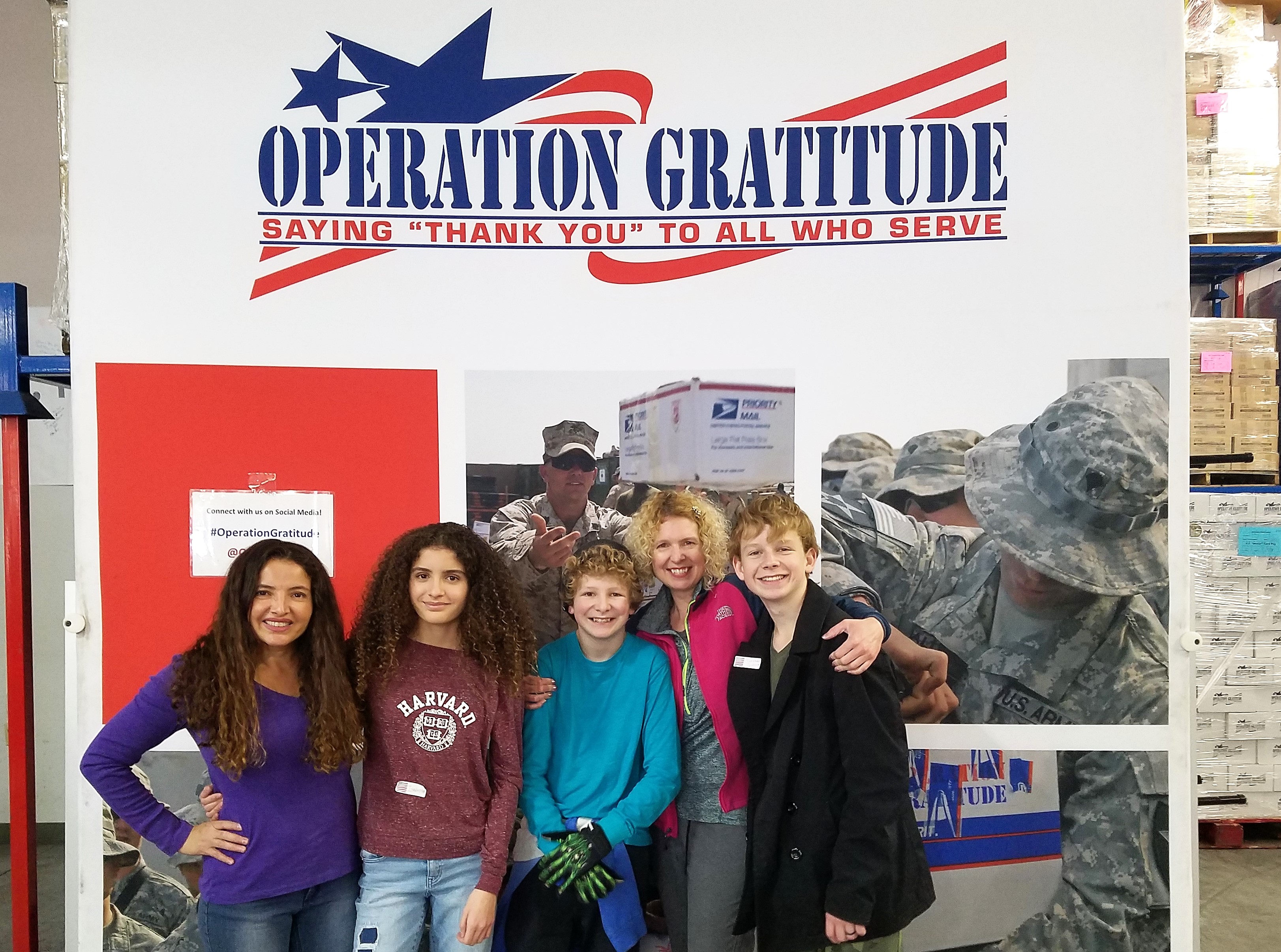 At any given time, Operation Gratitude's facility: “The FOB” (Forward Operating Base), is filled with millions of items donated by Americans from across the country. Once a month or more, their organization call on hundreds of eager and spirited Volunteers in the Southern California area to help us assemble these items to create the Operation Gratitude Care Packages. In February 2018, Harvardwood Helps volunteers joined the assembly line to assist in the production of the Care Packages, labeling, taping, running packages, re-stocking the lines, breaking down cartons, and other tasks.

For the 2018 MLK National Day of Service, Harvardwood Helps joined a community blood drive at Cedars-Sinai. Blood is traditionally in short supply in winter due to holidays, travel, inclement weather and colds/flu, which is why January has been designated National Blood Donor Month. Blood donation is a safe and simple procedure that takes a short time. Cedars alone uses nearly 60,000 units of blood per year to save the lives of thousands of patients. There's no substitute for blood so patients are dependent on healthy individuals to donate. 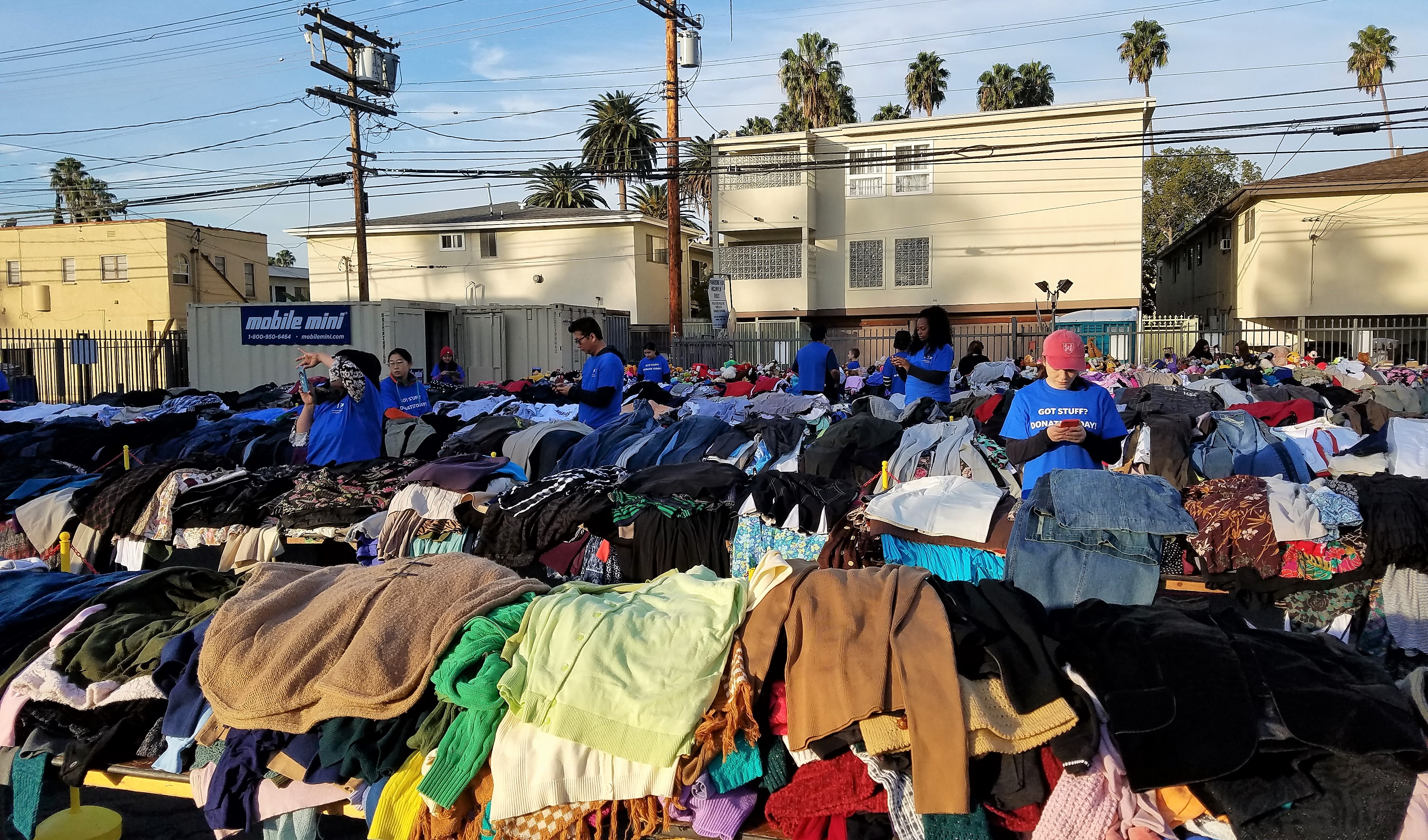 Harvardwood Helps pitched in to give away ​more than​ 75,000 pieces of clothing and children’s books to more than 3,000 in-need and at-risk ​members of our community​.

The National Park Service and its partners invited Harvardwood to roll up our sleeves and participate in National Trails Day, repairing trails at Rancho Sierra Vista/Satwiwa. RSVP below to let Stacy Cohen know that you're coming!

National Trails Day occurs annually on the first Saturday in June and is the country’s largest celebration of trails. The Santa Monica Mountains are home to approximately 500 miles of trails. Santa Monica Mountains National Recreation Area (SMMNRA) is the largest urban national park in the country, encompassing more than 150,000 acres of mountains and coastline in Ventura and Los Angeles counties. A unit of the National Park System, it comprises a seamless network of local, state and federal parks interwoven with private lands and communities. As one of only five Mediterranean ecosystems in the world, SMMNRA preserves the rich biological diversity of more than 450 animal species and 26 distinct plant communities. For more information, visit www.nps.gov/samo.

Steelhead Park in Elysian Valley is one a series of about a dozen small parks along the LA River in the Glendale Narrows. Designed by North East Trees, the park features native vegetation, a small outdoor classroom, and artistic gates and fences commemorating the steelhead trout that used to be plentiful in the LA River. The river here is soft bottom, with tall trees and plenty of ducks. Volunteers at this packed event received a FoLAR t-shirt and reusable grocery tote at the CleanUp. 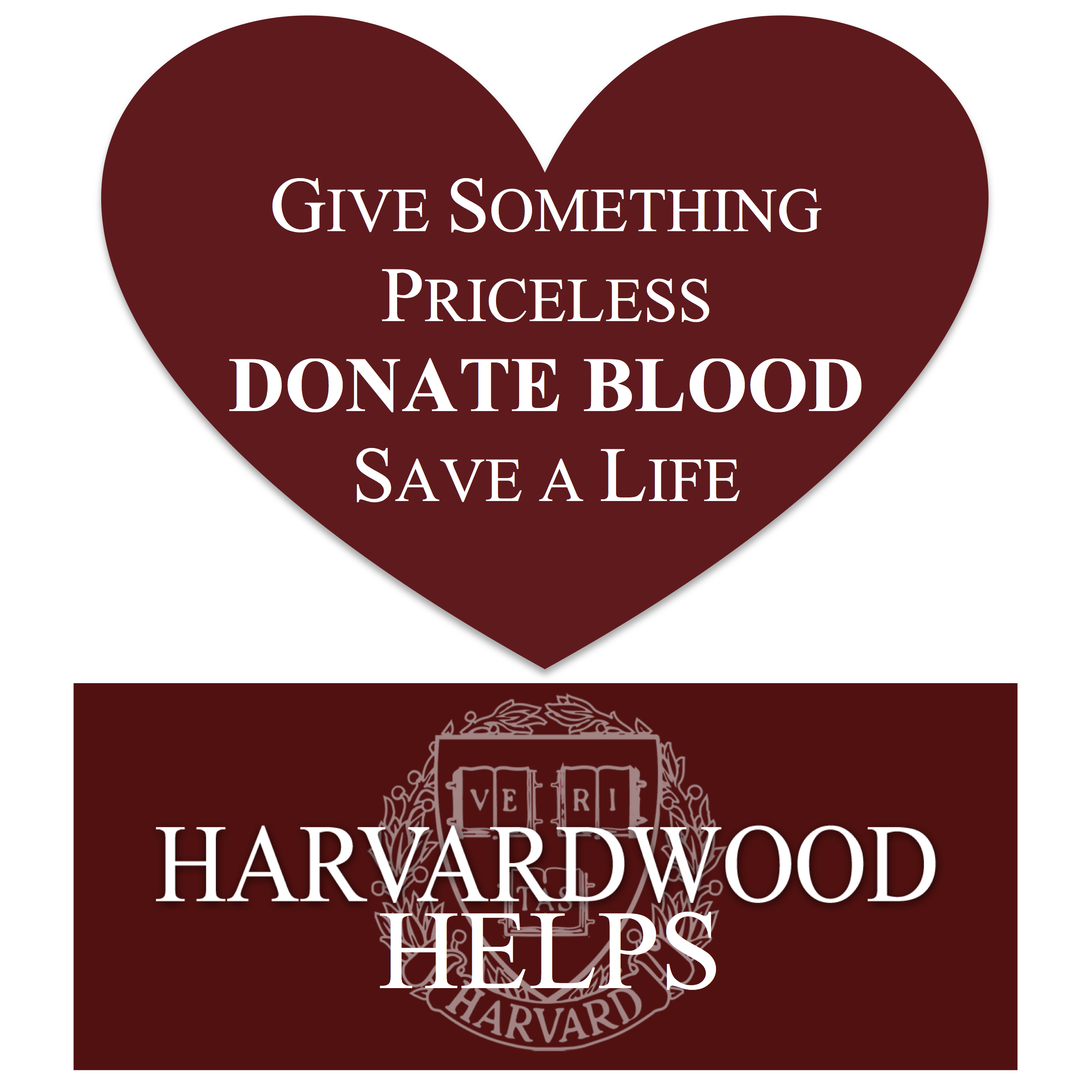 As part of the MLK National Day of Service, Give Something Priceless, DONATE BLOOD AND SAVE A LIFE!

Blood is traditionally in short supply during winter months due to holidays, travel, inclement weather and colds/flu, which is why January has been designated National Blood Donor Month. Blood donation is a safe and simple procedure and only takes a short time. And when you share your good health you will FEEL GREAT, knowing you have #Saved2Lives. Also, nurses will dote on your and give you cookies and juice! 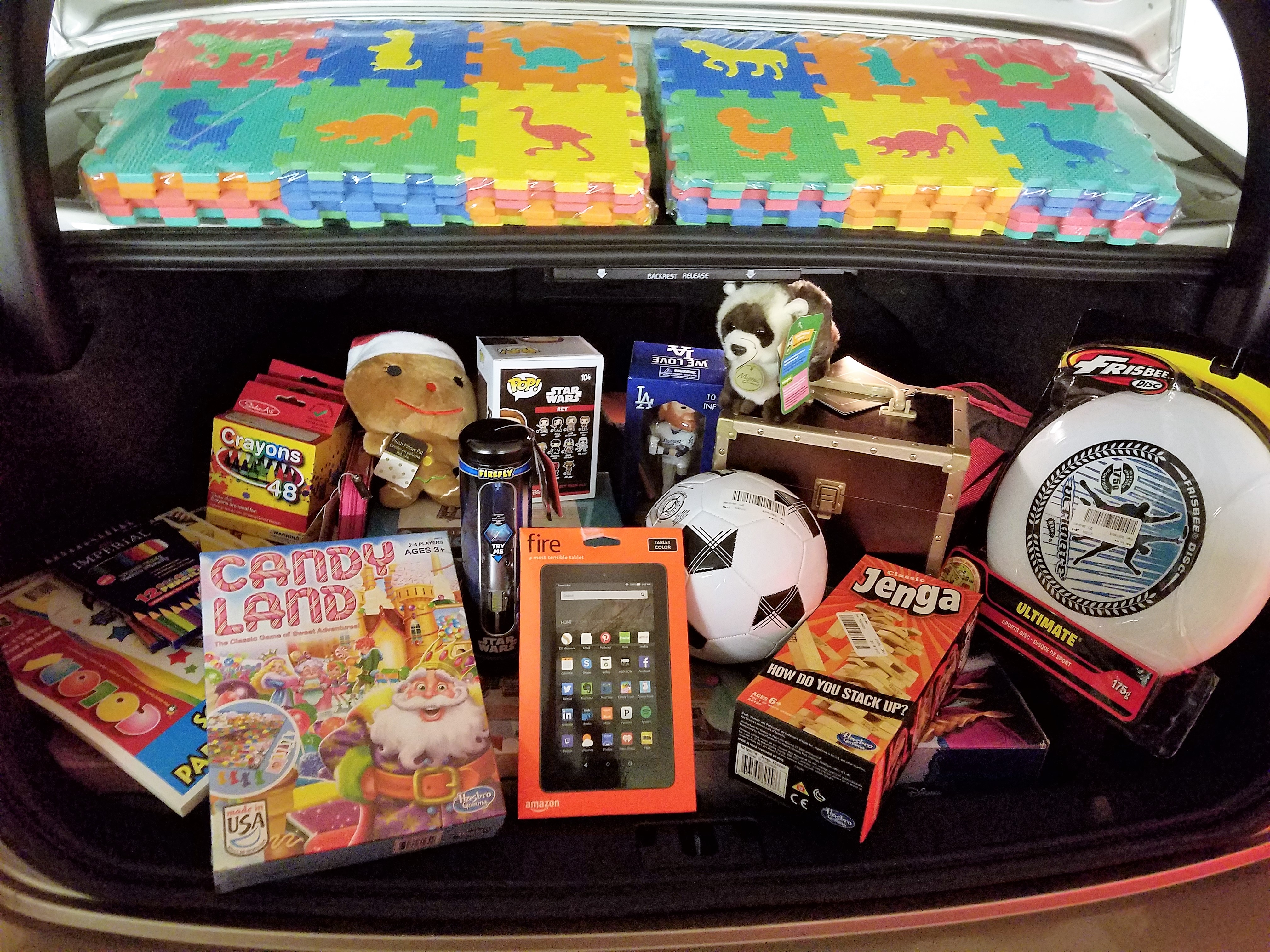 Harvardwood Helps came together to give the gift of life to commemorate the 9.11 National Day of Service and Remembrance. 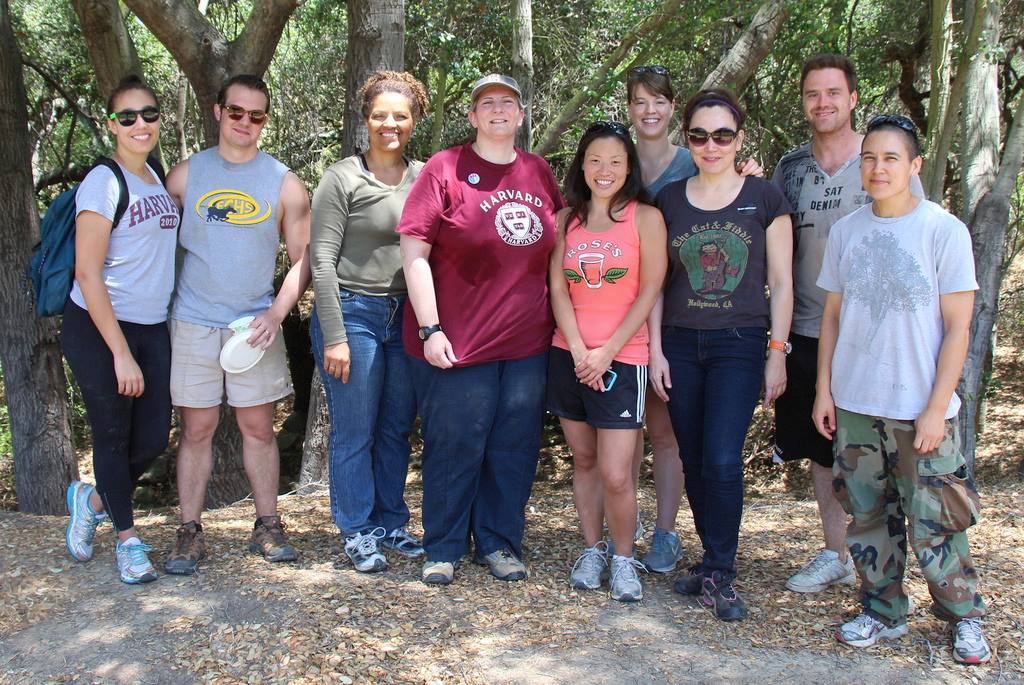 Harvardwood writers volunteered at the InsideOUT Writers' (IOW) weekly Writing Circle to work with IOW program alums. The mission of InsideOUT Writers is to reduce the juvenile recidivism rate by providing a range of services that evolves to meet the needs of currently and formerly incarcerated youth and young adults. Using creative writing as a catalyst for personal transformation, these young people are empowered with the knowledge and skills necessary to successfully re-integrate into our communities, becoming advocates for their future.

The Bette Davis Picnic Area is located at the upstream end of the scenic Glendale Narrows, the central and longest natural area of the LA River. The picnic area features wonderful tall old sycamore trees and a beautiful 1938 historic bridge. The River has sloped concrete sides and an earthen bottom with tall trees, sandbar islands, and lots of birds, including ducks, stilts, egrets and herons.

City Year Los Angeles invited Harvardwood Helps to pitch in on Dec. 6th at Cienega Elementary School and paint murals! The purpose of the event was to transform an elementary school through beautifying it with educational, fun and colorful murals, inspirational quotes, and college logos.​

We went to Backbone Trailhead in the Santa Monica Mountains to pitch in on National Trails Day!

The Fletcher Drive & Bowtie Parcel is located in the scenic Glendale Narrows, the central and longest natural area of the LA River. The site features historic Fletcher Drive Bridge (completed in 1927). The soft bottom river is home to ducks, cormorants, herons, and egrets. The site is just across from the beginning of the River’s Recreation Zone begins where both kayaking and fishing are allowed from Memorial Day to Labor Day.

Harvardwood Helps organized another MLK holiday weekend blood drive at Cedars-Sinai. January is National Blood Donor Month, and our members stepped up to the challenge, giving the priceless donation of blood.

Harvardwood pitched in on National Trails Day to participate in an incredible project that will have a huge positive impact on everyone, not just hikers and nature-lovers! We went to Topanga State Park to repair hiking trails by removing non-native invasive plants and cutting back overgrowth on the trails.

Harvardwood Helps attended a fun work-party down by the river at 'La Gran Limpieza' - The 24th Annual Great LA River Cleanup! This event is organized by the Friends of the Los Angeles River, a nonprofit dedicated to protecting and restoring the natural and historic heritage of the LA River.

January 19, 2013: Blood Drive for National Day of Service and Remembrance

In honor of the Presidential Inauguration and the Martin Luther King, Jr. National Day of Service, Harvardwood members shared their good health by donating blood at Children’s Hospital Los Angeles! The fact is that ONLY 3% of eligible donors in Los Angeles give blood regularly, the lowest rate of any major U.S. city, and the holiday season contributes to severe blood shortages in January, which is why this event took place during National Blood Donor Month. Since critically ill babies require blood that is less than five days old, Children's Hospital Los Angeles needs a constant flow of donors to keep the blood supply fresh and meet their need of 2,000 units of blood per month.

Harvardwood spent Earth Day Fun in the Sun at a great wetland restoration project at Rio de Los Angeles State Park just north of downtown LA.  We planted and cared for native trees, removed non-native invasive plants, and helped clean up this fantastic new park, which is located in one of the most park-poor parts of our city, along the Los Angeles River.

Did you know that ONLY 3% of eligible donors in Los Angeles give blood regularly, the lowest rate of any major U.S. city? And that blood is traditionally in short supply during the winter months due to the holidays, travel schedules, inclement weather and illness, which is why January has been designated National Blood Donor Month? Harvardwood members went together to donate blood on the MLK holiday! 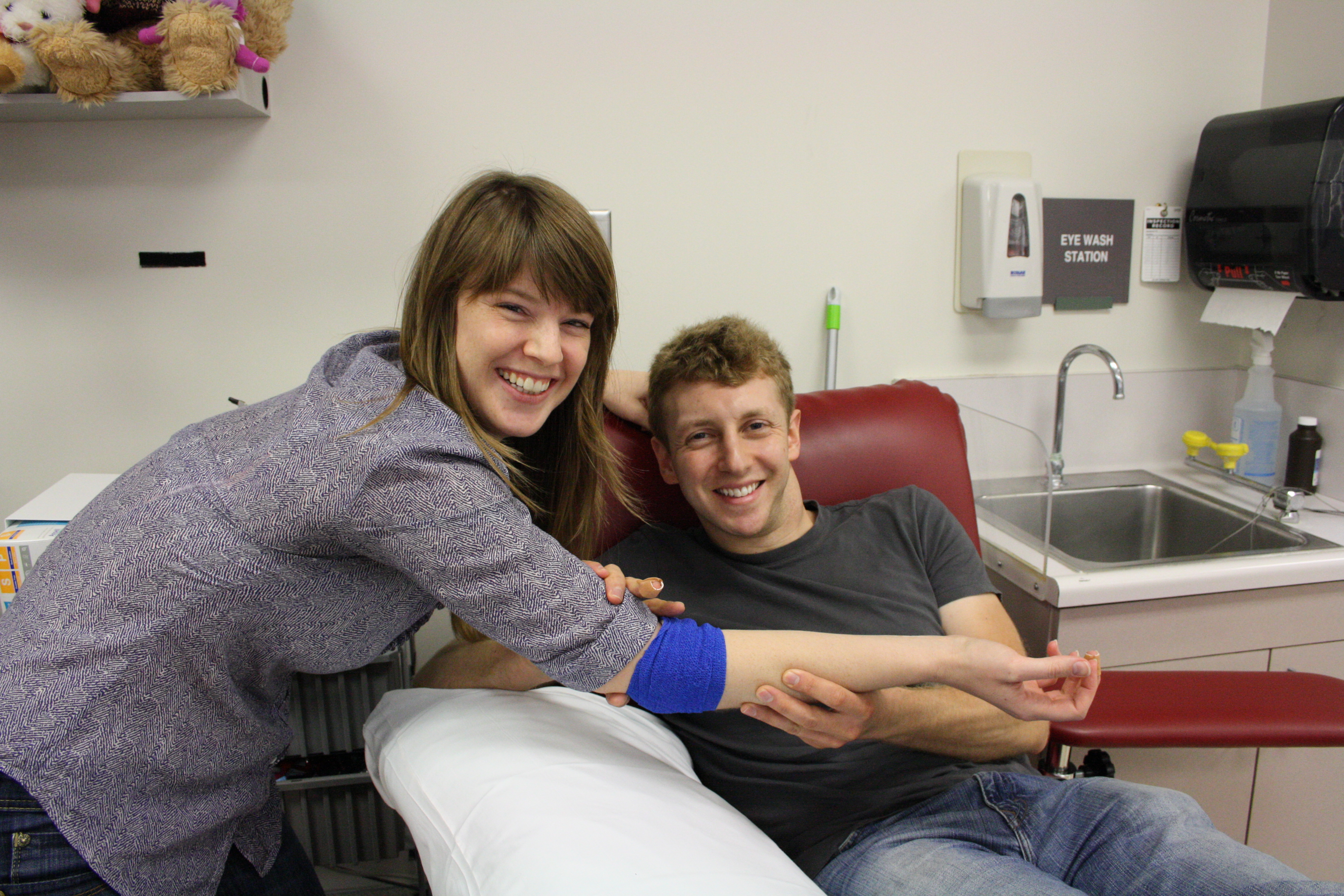 September 10, 2011: Blood Drive for National Day of Service and Remembrance

Holidays such as Labor Day weekend are a huge drain on the blood supply because of the increased number of people on the road and an uptick in injury accidents, so Harvardwood Helps went to donate blood this weekend. Blood donation is a safe and simple procedure and only takes a short time out of your day. And you will FEEL GREAT, knowing you have saved someone’s life.

We joined Harvard's Global Month of Service again this April by providing all Harvardwood members a chance to plant trees for Earth Day!  We collaborated with the Los Angeles Audubon Society at the stunning new Baldwin Hills Scenic Overlook, where attendees can enjoy breathtaking panoramic views of the entire Los Angeles basin.

No holiday season is complete without our annual Harvardwood Holiday Party!

Free hors d'oeuvres and a cash bar at this event celebrating Harvardwood Helps and other Harvard volunteers!

Keeping up our mission of bringing together the Harvard arts community to serve those in need, we celebrated EARTH DAY 2010! We collaborated with North East Trees on the California State Parks Foundation’s Wetland Restoration Project at Los Angeles State Historic Park, just north of downtown LA next to Chinatown.  This is a truly incredible project that will have a huge positive impact on our city!