*RSVP below for this free event*


Learn about the journey of working for major production companies to building one from scratch and Michelle and Ken gained the business sense to build a successful company complete with a strong team of creators and partnerships. Our discussion will feature Headspinner founders, Michelle Melanson and Ken Cuperus joined by show creator/writer, Diana Moore and led by Skye R. Regan '18.

Please send your questions for the panel to: [email protected] 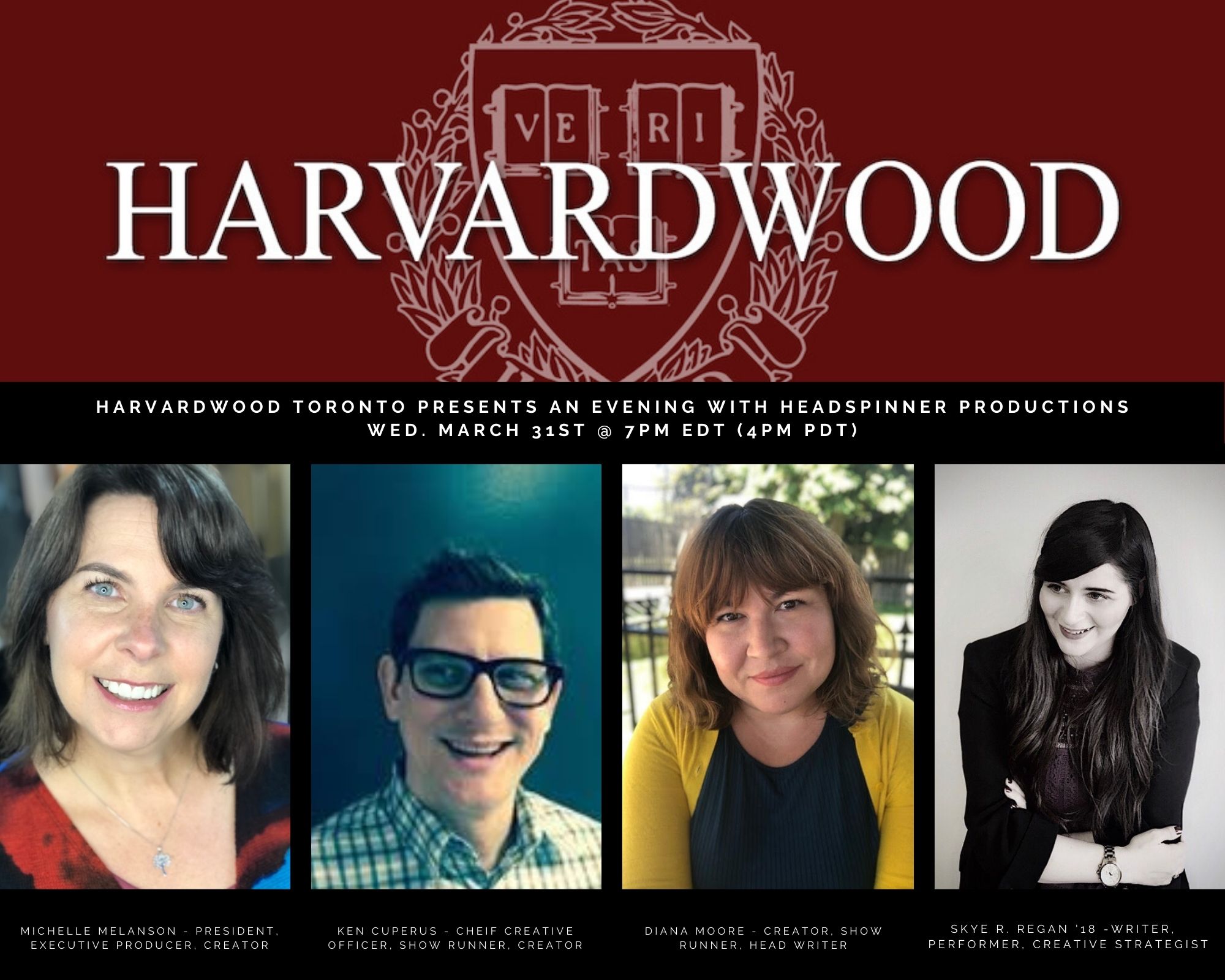 Michelle Melanson
Emmy and Bafta Nominated, Michelle Melanson has over 25 years experience in the production business with hundreds of episodes produced and over 50 awards and nominations. In 2018, Michelle launched Headspinner Productions with Showrunner and Husband Ken Cuperus. Prior to Headspinner, Michelle was President of Radical Sheep Productions - a Boat Rocker Media company, executive producing such shows as the worldwide hit The Next Step, as well as Fangbone!, The Bagel & Becky Show, Tee & Mo, Stella and Sam, The Yup Yups and Ollie The Boy Who Became What He Ate. Michelle has won the Canadian Screen award, the Grand Prize of the Youth Media Alliance, multiple Kidscreen Awards, and Cynopsis Awards. She also has a Juno Award for producing the Stella and Sam album. Michelle is also the Founder of Women Drawn Together - a free organization that fosters learning, networking, and mentorship for Women in the Animation community. In the past five years, the group has grown to 5 cities and over 1000 members. In 2019, Michelle was inducted into the Ryerson Radio and Television Wall of Fame.
Ken Cuperus
Ken Cuperus is an Emmy nominated writer/producer/showrunner with over one hundred hours of produced television credits, on such series as Carter, Stargate: Atlantis, The Listener, Frankie Drake, My Babysitter’s a Vampire, Mr. Young and Total Drama Island. Ken is also the co-creator/showrunner of award winning multi- cam sitcom, The Stanley Dynamic, which enjoyed a run of 52 half-hour episodes. Currently, Ken was the Showrunner on City TV’s hit drama procedural HUDSON & REX for Season One and remains a writer on Season II and III while developing properties for Headspinner. Along with his Emmy nomination, Ken has also been nominated for a Canadian Screen Award, two Canadian Screenwriter awards, and two Canadian Comedy awards. Ken was co-writer on a Leo Award winning episode of Mr. Young.
Diane Moore
Diana has worked on over 20 animated and live-action kids series, either as writer, head writer, showrunner or creator. She is best known for her work on “True and the Rainbow Kingdom” (Netflix), “Ollie the Boy Who Became What He Ate” (CBC Kids), “Stella and Sam” (Disney Jr) and “Chirp” (CBC Kids). She earned her stripes on the set of “The Big Comfy Couch” and has been a devoted champion for preschool silliness and whimsy ever since. She is currently showrunning the animated kids series "Denis and Me" based on the imagined life of YouTuber 'Denis' and his best friend Sir Meows A Lot.
Please consider making a donation to Harvardwood!