Harvardwood Night at THE PROM

THE PROM is a new musical comedy making its pre-Broadway debut at Atlanta’s Alliance Theatre through September 25.  The musical is directed and choreographed by Tony Award-winner Casey Nicholaw, director of Broadway’s Aladdin, Something Rotten! and co-director of The Book of Mormon. 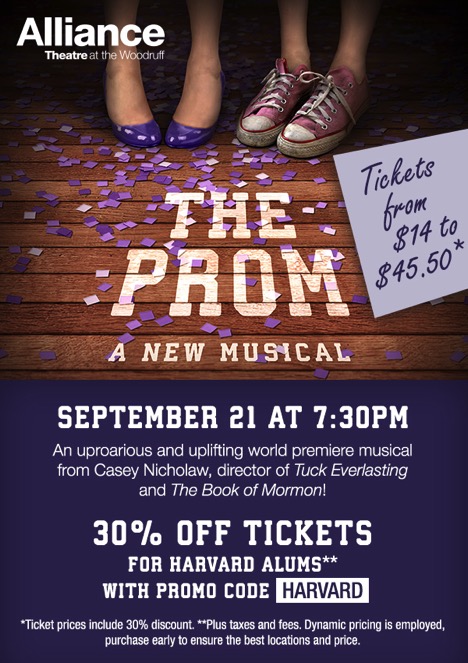 Emma becomes an instant outcast and national headline when her high school cancels the prom rather than let her attend with her girlfriend.  Sensing a chance to correct an injustice, and maybe get some good publicity along the way, a group of fading Broadway stars takes up the cause and invades Emma's small Indiana town. But their bumbling attempts at social activism make the situation far worse than they, or Emma, could have ever imagined.  Cultures clash and the town erupts in chaos.  The community's reputation, Emma's future, and the actors' careers all hang in the balance, until a true hero emerges to save the day.  Uproarious and uplifting with show-stopping dance numbers, this new musical is about inspiring people to accept their differences and being the star you were always meant to be.

ENTER PROMO CODE “HARVARD” TO GET THE DISCOUNT

Contains: Mild language and young adult situations. Recommended for ages 13 and up.