In 1921, at the age of 34, Roscoe "Fatty" Arbuckle was one of Hollywood's greatest stars.  A mentor to Buster Keaton and a collaborator of Charlie Chaplin, Arbuckle made some of the most wildly popular film comedies of the day.  In 1918, Paramount gave him a contract for what at the time was an amazing $3 million to make 18 short films over 3 years.  And then scandal 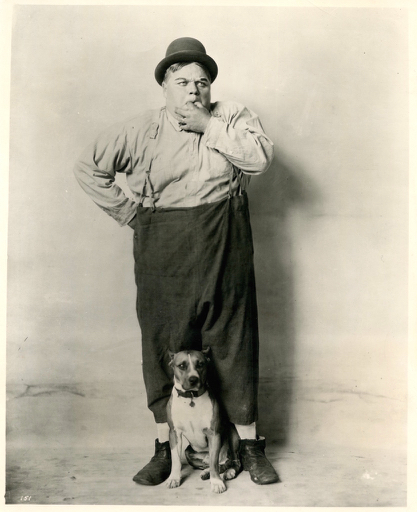 struck.  All at once, his acting career was over.  His films were banned from the theaters, and to this day are known only to the relatively small coterie of silent film buffs.  But now, finally, interest is reviving in Arbuckle's work.  And a notable step in this revival is the appearance of Steve Massa's new book, REDISCOVERING ROSCOE: The Films of "Fatty" Arbuckle.  In this talk, Massa will discuss the scandal and its aftermath as well as Arbuckle's artistic achievement. And, to make that achievement unmistakable, we will screen several of Arbuckle's finest short comedies.

Steve Massa is a major authority on Arbuckle's work and on silent film comedy in general.  His previous books include SLAPSTICK DIVAS: The Women of Silent Comedy; LAME BRAINS AND LUNATICS: The Good, the Bad, and the Forgotten of Silent Film Comedy; and MARCEL PEREZ: The International Mirth-Maker.

Massa will be interviewed by Robert Tevis.  Tevis writes a monthly column for Classic Images on film and film history.  His articles and reviews have appeared in Films of the Golden Age, Screentalk, and Written By.

REDISCOVERING ROSCOE: The Films of "Fatty" Arbuckle will be available for purchase, and a booksigning will follow the event.

Due to the Coronavirus situation, this event is now POSTPONED.  It will be rescheduled as soon as it is realistic to make plans.

Special thanks to Andy Goodwin and the Plymouth Hill Foundation