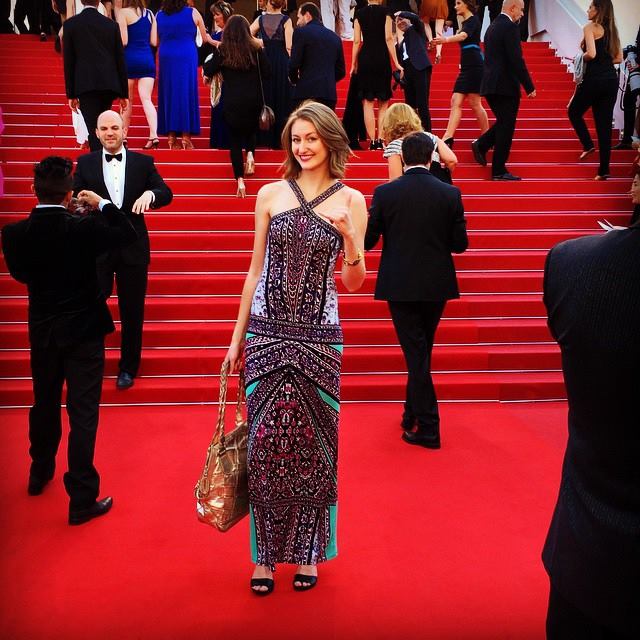 Zoë Morrison AB '11 recently became Head of Production at Delirio Films, where she's been the lead on a slew of amazing projects, such as Mike Wallace Is Here and Ask Dr. Ruth, which both premiered at the 2019 Sundance Film Festival before their theatrical releases, and Hulu’s hit original documentary Too Funny To Fail: The Life and Death of the Dana Carvey Show (2017).

Q. When did your interest in producing come to you in life? Can you tell us about it?

A. Honestly I can tell you the exact moment. It was at a really great Office of Career Services seminar given by Harvardwood's Mia Riverton Alpert halfway through my sophomore year that broke down the different types of professions in Hollywood. She went through agents, managers, studio/network execs, and when she got to creative producers something clicked. I thought, that's a combination of my skills & interests that I can visualize myself doing well and enjoying—combining organization with creativity, helping artists hone their ideas and bring them to life, with a low risk for boredom thanks to the nature of the work being project-based with a constant stream of new collaborators. Plus, the fruit of my labors would be something tangible that would (hopefully) make an impact on people, giving them food for thought or at the very least bringing them joy, which is so valuable in itself. I had previously thought I'd go into the fine arts in some sort of administrative role, but had grown disenchanted with how that world felt inaccessible to many people. I had only ever considered film as a consumer, so the seminar really opened my eyes to it as a whole industry that was possible for me to enter, and I realized it could be the perfect sweet spot marrying the arts with a whole lot more action, commerce, and wider audience reach.

Q. In what ways did you get involved in film while at school?

A. Right after that seminar, I switched my secondary field from History of Art & Architecture to VES Film Studies and looked for ways to get involved with film via extracurriculars. I was already planning to study abroad my junior fall though, and because of the extracurricular structure and comping schedule at Harvard I was a bit late on that front. So I focused on maximizing my study abroad time with film classes at Paris III Sorbonne Nouvelle, and when I returned to campus I landed at HUTV, where I spent the next year and a half planning events for guest speakers and helping to grow the relatively new organization. And I continued activities I had previously been involved with that weren't explicitly film related, but still relevant like producing the dance section of Arts First weekend and working as a tutor at the Writing Center. I also joined Harvardwood, which led to a fantastic summer internship at FilmNation in NYC. There I learned a lot more detail about different models of film production... and also learned that I hated living in New York! It was LA or bust after that.

Q. What are the most valuable skills you learned at school that apply to your position now?

A. Definitely time management, research, and just the insistence on thoroughness, detail orientation, and critical thinking that every course at Harvard hammers into you. Learning to fudge my way through discussion sections when I hadn't gotten through all the reading also helped ;)

Q. Why did you choose Harvard? How was your experience there?

A. I got lucky -- it just felt right on a deep gut level when I did a campus visit, and I was lucky enough to get in early. Of course all its other superlatives made it an obvious target as well. I had a hands-down amazing experience there, highlighted most of all by the strong friendships that came out of it, and was terrifically inspired by the academic resources it provided. I chose breadth over depth in college and had a lot of fun sampling a range of interests across the humanities & social sciences while getting to travel a lot as well.

Q. What would you say to students interested in pursuing a path similar to yours?

A. 1. Study whatever you want, as it truly does not matter what you majored in. 2. Watch a lot of movies & shows, because more than any class you can take that's the best way to build your knowledge base and your taste. 3. If you want to produce, practice! People in creative roles always give advice to practice, practice, practice your craft—it's true for writing, directing, acting, and it's true for producing too. Even though it seems so businessy, it is a creative endeavor and doing student productions or low cost projects with a group of friends is a great way to figure things out, make mistakes, and start building hands-on experience. Especially take advantage of your time on campus when your access to equipment, locations, grants, etc. is a lot more affordable. ;) If you are interested in documentary in particular, brainstorm an interesting subject, grab a camera (or a cinematographer friend) and get out there and start making one—it's an extremely rewarding genre with a low barrier to entry, lots of artistic latitude, and high possibility for memorable results. 4. FYI the most industry-connected extracurriculars at Harvard are the Lampoon and the Hasty Pudding. As a student I had zero clue about the history and networks of those organizations, which didn't seem obviously film-related to me, and wish someone had told me!

Q. Tell us about how you got connected with Delirio, projects you worked on, and your ascent!

A. In 2016, I was working as a Creative Executive at an independent film financier when I saw a job posting on Harvardwood for an Associate Producer role at Delirio, a boutique documentary production company whose character-driven taste I loved. I had entered Hollywood wanting to be a creative producer but found myself drifting into a development executive lane, and was really craving an opportunity to be more hands-on and actually make the sausage. And that's exactly what I jumped into at Delirio, where not 2 weeks after I started I was taking a red eye to New York to participate in long brainstorming sessions with an A-list director and run physical production on interview shoots with exciting public intellectuals. It was a fantastic challenge and I caught the documentary bug hard. Shortly after that I dove into line producing our successful Hulu documentary Too Funny to Fail, a slice of pop culture history about the rise and fall of the Dana Carvey Show, while also co-producing Delirio's first television project, the six-part docuseries Hunting ISIS about Americans volunteering with Kurdish forces in Iraq and Syria to fight against ISIS. It was often hard to switch my brain between something so light and something so serious, but they proved good counterpoints to each other. On Hunting ISIS I was able to flex a wider range of skills as well—developing our characters & storylines, field producing and sometimes directing vérité shoots, shepherding editorial, and managing all logistics—essentially showrunning the series alongside its creator/director. After those projects, I co-produced our feature docs The All-Americans, Ask Dr. Ruth, and Mike Wallace Is Here (the latter two of which premiered at Sundance in 2019), as well as our true crime series No One Saw a Thing and Netflix sports series The Playbook. Now as Head of Production, I oversee the physical and creative production of our slate of active projects.

A. There is definitely a long-overdue shift occurring where people are realizing how much representation matters and how that applies to way more than who is "cast" on screen—it applies to what stories are being chosen as worth telling, and who's empowered to tell them. This is particularly important in documentary which can often stray into anthropological territory by the very nature of its format. Some of the earliest documentaries were ethnographic in nature and the act of training a camera on people, places, or issues that are deemed interesting or worthy of investigation by the filmmaker can have an inherently colonial tinge to it. It's important that documentarians avoid that both by taking a well-measured, well-researched approach to their subjects in a journalistic sense, and by changing industry habits to commercially value stories about a wider range of human experience, explored by filmmakers whose backgrounds better connect to that experience. And that's happening. I think we're in an awkward phase right now, where there's a strictness to it and a reactive call-out culture that makes it easy to feel like you're damned if you do and damned if you don't take steps to make change. But, progress is a messy business and obviously worthwhile. At Delirio, we are working on several projects that explicitly touch on some of the social issues brought to the forefront in 2020 including systemic racism and Black experience, which are being helmed by talented directors of color, and we are making a meaningful effort to increase the diversity of our filmmaking teams across creative, technical, and logistical roles. On that front, we also work closely with filmmaker Alma Har'el's talent discovery organization Free The Work.

A. Call me crazy but LA's been a pretty easy city to quarantine in. Certainly the social and economic landscape has changed tremendously, but in terms of my personal experience I guess I realized I hadn't been going out much the prior year anyway!  I've felt lucky to ride out this year in a place with great produce, easily accessible natural spaces, (generally) reasonable temperatures, fast Amazon shipping, and fresh air... well, maybe the last one's a stretch. And I've definitely also been lucky to have a role in the industry that has kept working throughout.

Q. Can you tell us about changes at Delirio due to COVID? How have projects been impacted (beyond cost increases and testing protocols)? What new skills have you had to learn as a result?

A. We are still working remotely which has required us to adjust our workflows, especially in post production. Some of our projects have been delayed due to Covid—especially ones requiring significant travel—and there was a spell in the spring & summer where financiers & distributors were figuring out their respective strategies in response to the virus. But we've moved several more projects to greenlight and had something to shoot literally the day filming was OK'd again by the county. It's been a year of recalibration after recalibration, and we are keeping abreast of public health & industry recommendations, available testing options, and travel restrictions to make sure our projects are budgeted and scheduled appropriately. Luckily, by virtue of working in documentary, we have a nimble mindset anyway since we're accustomed to reacting to real-world people and unpredictable conditions.