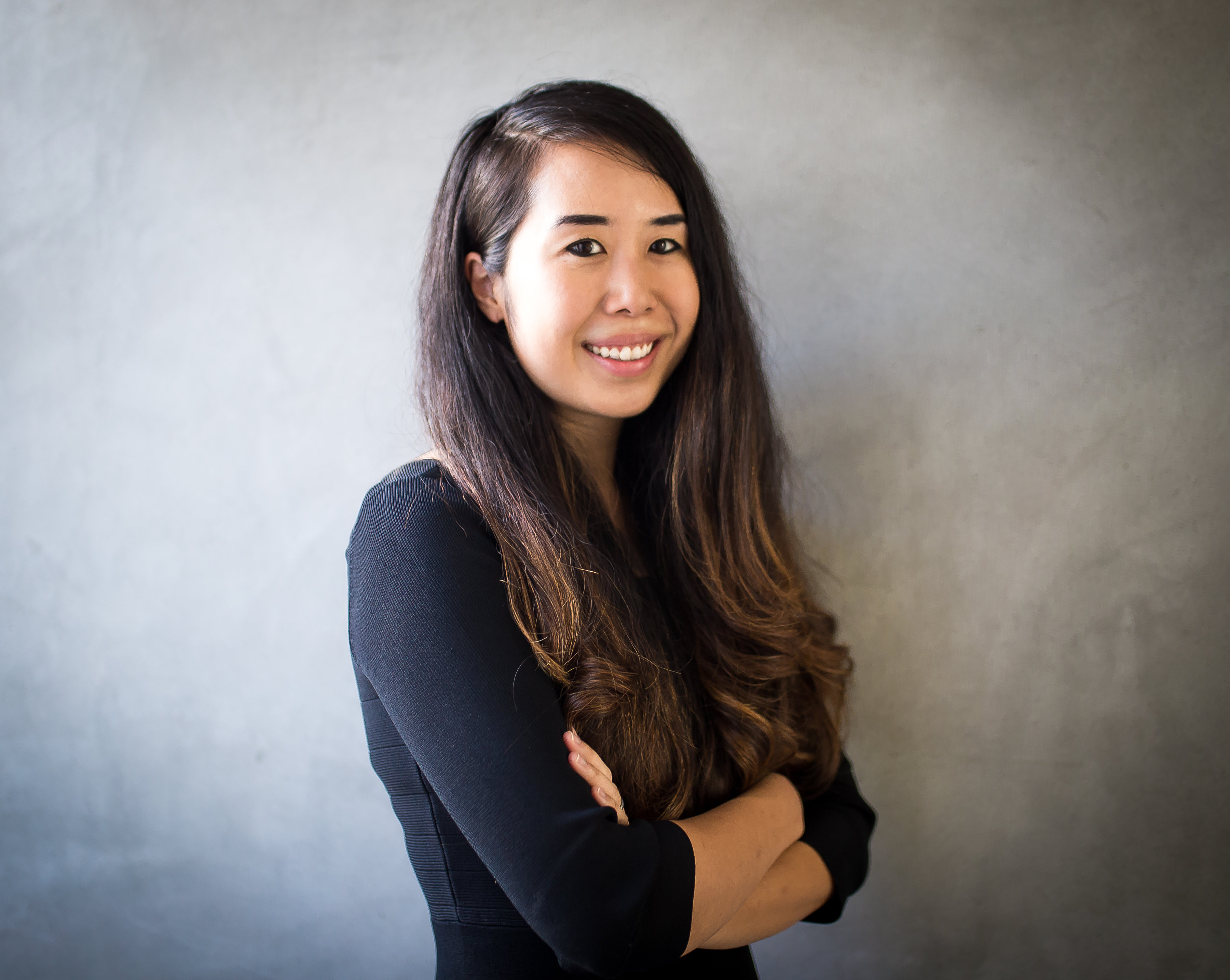 This past summer, Lillian Yu AB '11 sold her spec feature, a romantic comedy entitled Singles Day, to New Line! In addition to being staffed on NBC's sitcom, Powerless, Lillian was also part of the writers' room for upcoming series Warrior. The period drama is set to premiere on Cinemax in 2019. Photo credit to Ashleigh Cahn Photography.

Q. What inspired you to become a screenwriter? Did you already plan on becoming a writer when you were at Harvard?

A. I've been extraordinarily lucky in that I kind of always knew I wanted to be a writer, but it was in high school when I decided to pursue it for real. I was an enormous nerd back then (and still am)—my favorite show was Futurama—and after some light internet sleuthing in ninth grade, I found out that most of the writers had written for the Harvard Lampoon. I thought, "Huh, maybe I can do that too." Before that point, my hypothetical career path was a bit more first-generationally binary: doctor or lawyer. It was mind-blowing that there might be a real, blazed trail to get to where I wanted to go. So anyways, I got my academic act together, made no friends in high school, and was fortunate enough to get into Harvard and the Lampoon.

Q. Oftentimes, new writers are adamant about being either a TV writer OR a screenwriter. But you're both! Did you always know that you were interested in working in both TV and features, or is that an unexpected development in your career?

A. The short answer is: I've always wanted to do both. My first and greatest love has always been movies. I grew up watching everything from Disney animations to Eddie Murphy talking to/as animal(s) romps to slasher flicks. I then studied film in college and fell in love with all the classics I missed in my pop culture-dominated childhood. I also worked as a feature development exec before I transitioned to writing, so I'm generally more comfortable in the feature space.

That said, I like the office-job environment & collaboration & people, so I always knew I wanted to do TV too. In many ways, I think of TV as the harder job that keeps me on my game because it involves going into a room for 8 hours a day and, depending on the genre of the show, pitching jokes/story/arcs/Reddit-breaking character deaths, etc. for those 8 hours. I've heard TV writing described as both an excruciatingly long dinner party and high-level codebreaking. I think there's merit to both of these analogies, with the thesis being that TV writing is cerebral gymnastics, which is what I love about it.

Q. Has it ever been a challenge to decide whether a story should be told as a pilot/series versus a feature, or do you generally know straightaway as you develop the idea?

A. I usually have a pretty clear vision of how I want to tell a story, but my managers or agents (or executives, depending on where I am in the development process) might have their own opinions. I like to gather all the data I can and reevaluate as I go along.

Q. Congrats on the recent sale of your spec feature, SINGLES DAY! What inspired you to write a feature about this Chinese celebration?

A. Thanks so much! I've always been a big fan of the holiday and its message. Being single is sometimes the best but also sometimes the worst, so I think it's only fair that singles get a holiday to celebrate themselves. I also just like having an excuse to buy myself a ton of unnecessary shit. But anyways, the germ of the idea came from the realization that China had neither A) to date, a Singles Day-centric movie nor B) a real version of Love Actually. In the end, I had an a-ha moment of basically wedding these two things together. From there, I created characters and stories I got really excited about.

Q. So—a spec feature sale; word is, that's pretty rare these days. Can you tell us more about how this came about?

A. To be honest, I'm just really lucky that I have a stellar team (to whom I pay a sizeable portion of my paychecks). My agents strategized the right time to go out with the spec, my lawyers helped to negotiate the deal, and my managers were/still are my ongoing therapists. It takes a village.

Q. You've also worked on two shows, Powerless and the upcoming series Warrior. How did you prepare for your first-ever staffing interview?

A. I think if you have friends or even kind of tangentially know someone who knows someone who has the job you want, you should take them out for lunch or coffee. My staffing interview prep involved a lot of begging friends to have lunch with me and picking their brains for advice. Anyways, I have very kind and generous friends. Except for Steve. Fuck that guy.

Q. What was the script (or scripts) that "got your foot in the door," whether it was the staffing job or your reps? From that experience, what advice would you give to early-career writers?

A. I wrote two half-hours that got me both. The first was an original pilot called Making Love, and the second was a spec of Fresh Off the Boat. For aspiring TV writers, I would recommend having a spec of an existing show—it was out of vogue for a while, but I've had a good number of showrunners over the past few years ask for one.

My other, more macro piece of advice is twofold: first, work as an assistant. Get the lay of the land, and learn the players. See how this weird system works. I can't tell you the number of seasoned writer-friends who have asked me, a lowly baby writer, for advice on this kind of thing. My only leg up is knowing the industry—who the good agents are, which producers won't steal your idea, which executive is looking to buy a project about a deaf Tibetan Mastiff, etc. Second piece of advice: work in development. Working as a development exec was basically my grad school in screenwriting. You get to peek behind the curtain and see how everything works from the buyer's side—what executives look for in a pitch, the note behind the note, meeting etiquette, standard story structure, etc. This was the best investment of my time I could have made, and I actually got paid to do it.

I guess if you work as a development assistant, you can do both these things in one fell swoop. Well, however you do it, knowledge really is power.

Q. Do you have a preference between collaborating with others in the writers' room versus writing and rewriting a feature solo?

A. I really do love both. I love working from home in my pajamas and not having to worry about putting on make-up so I don't look like the swamp monster I am. I also love working with other writers, going into an office, and having friends I can talk to about how much I love Ballers even though I really shouldn't.

Q. Summer 2018 was huge for Asian-American film and filmmakers, most notably with the blockbuster success of Crazy Rich Asians and its #GoldOpen. And obviously, diversity has been a "hot" topic in the industry for the past couple of years. Aside from increased representation behind and in front of the camera, what further improvements would you like to see take place, and what needs to happen to implement them?

A. Oh boy. Well, let me first preface this by saying my thoughts are in no way a comprehensive answer to your question or representative of everyone who identifies as "diverse." I can only speak from my very specific, limited perspective as a Chinese-American woman. Also, no one in Hollywood knows shit. That all said, here are my two cents:

The strides that have taken place recently are incredible. However, there needs to be even more encouragement of diversity on all sides and at all levels. I think they should promote more diverse executives, agents, managers, and producers. I think they should hire more diverse actors and writers, and on a related note, I think they should work on bringing up more diverse showrunners. "They" here meaning the system because this is a systemic problem that requires some tectonic shifts. Anyways, it always trickles down from the top, and a big problem is that underrepresented people rarely have the opportunity to get there. Diversity initiatives are great, but they mostly apply to people starting out. If we had more diverse showrunners/executives/producers/agents/etc., then there would probably be many more opportunities for diverse people in all capacities.

For people not in the industry, I think it's important to support diverse content. Like #GoldOpen supporting Crazy Rich Asians and Jon Chu & Henry Golding buying out a theater for Searching, go out and support the content of the underrepresented. Hollywood is mercenary—Hollywood makes decisions based on the bottom line. The only way to convince studios and executives to make more diverse content is to support the diverse content that comes out. This is all to say: you have a voice, and that voice is your wallet.