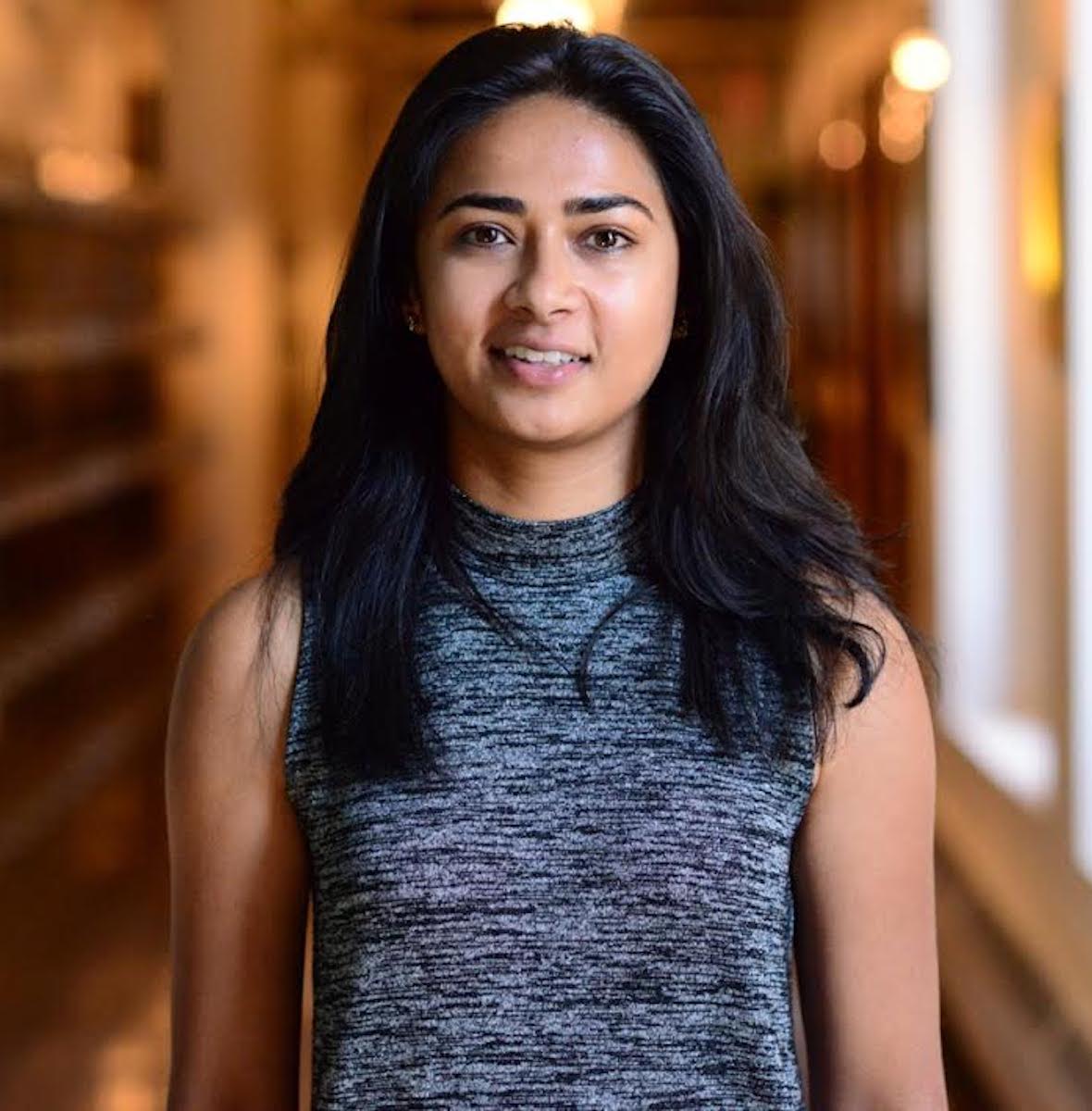 Ria Tobaccowala AB '10 is an Indian-American writer-director based in New York City. Her short film, Shadows, was selected for the 2020 Tribeca Film Festival and is now streaming on HBO Max.

Q. What parts of your upbringing in Chicago led you to becoming a filmmaker? Can you speak about any thread between childhood and now?

A. My love for storytelling and filmmaking started in my early years. Instinctually, I would gravitate towards my father’s camcorders. In our home movies, I’d be jumping in front of the lens, begging him to let me use it. I remember my childhood home being full of cameras, books, and music. My parents love the arts and gave me access to different art forms throughout my childhood. They are the single most influential force in my journey as a filmmaker.

At my high school in Chicago, I had a wonderful photography teacher who inspired me. I spent the majority of my time in the school’s dark room. I also shot my first short film with a Super 8 camera. By then, I was hooked on the power of images to tell a story. In many ways, as a teenager and now as an adult, I’ve simply been nurturing the young girl within me who was born keen to film stories about life.

A. At Harvard, I varied my creative interests. I was a photographer for the Harvard Crimson as well as produced and danced in cultural shows, such as Ghungroo. My blockmates would lovingly laugh whenever I edited promo videos for campus events in a baseball cap. They called it my director’s hat. Little did we all know, a decade later I’d be keeping up the tradition of wearing baseball caps while editing my films. Harvard was the beginning of an important detour from pursuing filmmaking as a career. I spent college filling my mind with new subjects and filling my heart with amazing life experiences and friendships.

Q. Can you speak about your time at Google, staying creative in a corporate setting, and maintaining your goals?

A. Google surprisingly brought me back to the world of storytelling. Google is an intrinsically creative place where storytelling is required when imagining future technologies. I joined their rotational marketing program after graduation. One product I worked on was Google+. Our team’s mandate was to encourage content development on the platform with some of the most influential thought leaders and creators, as well as elevate underrepresented voices to the mainstream through social and video platforms.

I developed content partnerships with the New York Times, ESPN, NBC as well as produced interviews with President Obama, First Lady Michelle Obama, the Dalai Lama, and many others around major cultural, social, and public events. For example, I produced State of the Union interviews with President Obama, inviting Americans to be the first to converse with the President before the media. To use technology, such as social and video platforms, to democratize storytelling was a central mission for me at Google. I’ve carried with me, as a filmmaker, the same mission to elevate unrepresented voices in my work.

Q. What are the greatest challenges you've encountered as a director? Can you describe a specific day, project, or challenge?

A. On set, directors make hundreds of decisions a day to execute their vision. The greatest challenge is coordinating that vision with my team with the constant ticking clock of production. When I first started film school at NYU, I was worried I would be ill prepared to be a director after spending five years in a large corporate tech company. However, the leadership training and team management experience from Google has become the bedrock of my directing style. Filmmaking is a team sport with a cross-functional squad. I firmly believe that the best films come from true collaboration. The director isn’t an expert in everything and should encourage all departments - camera, production design, costumes, sound, etc. - to build a shared vision. As a director, I’m constantly thinking ahead and calculating how decisions in one department affects the rest. For example, a last minute change in the color of a dress could impact a carefully constructed lighting plan. Even the smallest little details could have a ripple effect that can delay production or affect the overall vision.

Q. What brought about Shadows? What brought you from the idea in your head to gathering friends / contacts and executing?

A. Stephen King mentions in his book On Writing that most stories find you, not the other way around. I’ve often found that in the research for one idea, a better idea usually finds me. With Shadows, I had been working on a different project about Muslim-Americans in the Military when I read a story about the growing embrace of Islam in Latinx communities. As someone from an interfaith family, I felt compelled to tell a story about a newly interfaith family renegotiating their individual and group identities.

While in film school, I was given the advice to create as much as possible outside of class assignments to develop my storytelling muscles. Shadows was my first project done outside the support system of film school. I crowdfunded the production budget and collaborated with friends, some of which were from NYU and Harvard, who donated their time and talents to execute the vision for the film.

Q. What is the project you are most excited about tackling next?

A. I recently shot a proof of concept short for a television series I’m developing called User Zero. The project explores the use of artificial intelligence in treating mental health conditions as well as the role of women in the tech industry. This series relates to my experience living and working in Silicon Valley. I want to tell a story that considers the implications of using innovative new technology to deal with some of the hardest, most complex, and most uniquely human issues we have yet to solve.

Q. We had a productive conversation about directing vs. producing. How do you switch hats?

A. The best filmmakers are able to wear multiple hats at the same time. Some of the directors I admire are prolific producers, writers, cinematographers, and editors. If you go to Steven Spielberg’s IMDb page, you’ll see his wide range of credits. He has produced three times more films than he has directed. It is critical to understand all the creative and commercial elements of filmmaking. I normally wear multiple hats at the same time. For example, when I direct, I think about how the film will edit together and what producing challenge is coming up as we coordinate the next day of filming.

Q. In what ways are you driven by your mission(s) in Hollywood?

A. My creative directive is to elevate new voices into mainstream culture. This instructs my choices in terms of characters and story worlds. When I think about new projects, I gravitate towards untold stories about people, places, or histories where I could create something that is both specific and universal. Specific in terms of being authentic to the truth of the characters, but also universal in regards to themes and emotions that we all experience as humans. What I love about film as a distinct art form is the power of moving images to conjure emotional connections and empathy. I am deeply motivated to build a more empathetic world through filmmaking.

Q. What do you know you DON'T want to do with your career? What might you avoid?

A. This connects to the last question in terms of creating with a purpose. I avoid working on projects that don’t resonate with me. Filmmaking requires an enormous amount of time and effort, so I prefer to pick projects that feel authentic and motivate me.