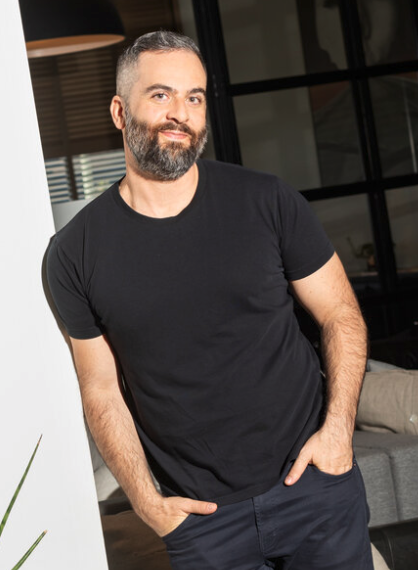 Julio Vincent Gambuto AB '00 is a writer and director, based in New York City. Team Marco, Julio’s debut feature film, is now available nationwide in the US and Canada, from Samuel Goldwyn Films. Check it out. Julio also wrote that viral essay about the pandemic that 20 million people read around the world. Now, he’s a weekly contributor to Medium.

Q. What about your upbringing in Staten Island first inspired you to write, direct, produce, etc. and get involved with the film industry?

A. Being an artist in an Italian-American family can be tough. We’re the children of immigrants, so when you get the chance to go to Harvard, the last thing your parents really want to hear is that you want to be an artist. My family has always been remarkably supportive, though. They trusted me from the beginning, and it’s really only because of their love and support that I was able to stay the course. Specifically, I think Italian-Americans are natural storytellers. We are a very dramatic culture — at least in my family — so stories are how we communicate. I actually discovered that for myself at Harvard. I realized freshman year that a lot of people around me communicated only through intellectual sparring — not all, but many — and that was a different form of communication than I had been used to from a working-class family. I just wanted to tell stories. It’s how I connect to people.

Q. What motivated you to continue studies at USC in Directing?

A. To be honest, I was just very frustrated that my acting career wasn’t going anywhere. I had a movie deal with an independent film company to make a film based on my one-man show (Julie from Staten Island), but it fell through during the recession in 2008, so I put myself back in school.

Q. In what ways did you get involved in film while at Harvard?

A. I was very involved in theater with the HRDC. I loved it. I came to film much later in my life. I was an actor right out of school. I did a lot of downtown theater in New York, working with an LGBTQ+ theater company. I did some improv and then went into standup comedy to prepare for my one-man show. The show was really a turning point for me. I ran it in New York monthly for two years, then in LA. We had an independent movie deal, but it fell through in the ’08 recession, so I put myself back in school and went to film school at 32.

Q. What are the most valuable skills you DIDN'T learn at Harvard or USC? You can see what we're getting at here. What can only be learned in the field?

A. I am very privileged to have gone to the institutions that I did, but you can’t learn everything in school, especially in film. I went to film school so that I could step away from the demands of having a day job and focus, so I could gain momentum. It’s a very personal decision, and so many filmmakers don’t go to film school. For me, though, I felt I wanted that time to train. That said, there is no training like being in the real world — having to raise money, having to find cast, having to make your days on-set.

Q. Tell us about what you are most excited about regarding Team Marco, and the timing? What are the subtle messages that one might expect?

A. Team Marco is a family film, so I’m just excited for moms and dads to see it. We had no idea we would be releasing it during a pandemic, but it seems its message is more relevant than ever — love the ones around you, that’s what matters most.

Q. What would you say to students and young folks interested in pursuing a path similar to yours?

Q. Tell us about your motivation for your Medium article, your desire to write about the Pandemic, and how Team Marco plays into that mission?

A. The Medium essay was a surreal experience. I am used to writing for a small circle of people, not 20M, so you can imagine what a trip that was. I do think, though, that the motivation is the same: to let people know that we’re all in this together, that it’s okay to be upset, devastated, affected by the things that happen in our lives and in the world. The connective tissue, really, is that the world is moving fast, and we have to take a breath to feel our lives unfold. The Medium essays are specific to the pandemic and to how we as a society might re-interpret this moment as a positive step toward a more fair and sustainable world. Marco is specific to families and how we appreciate what we have in front of us before it’s gone.

A. I think we’re changing. I still don’t think we’re changing fast enough. But I applaud the efforts that creatives are making in all walks of life to make their voices heard. I have been part of some very privileged communities and, at the same time, I’m a gay working-class kid who has worked night and day since college to have a career, so I see our challenges from multiple vantage points. We all have a responsibility to expand opportunities and seats at the table.