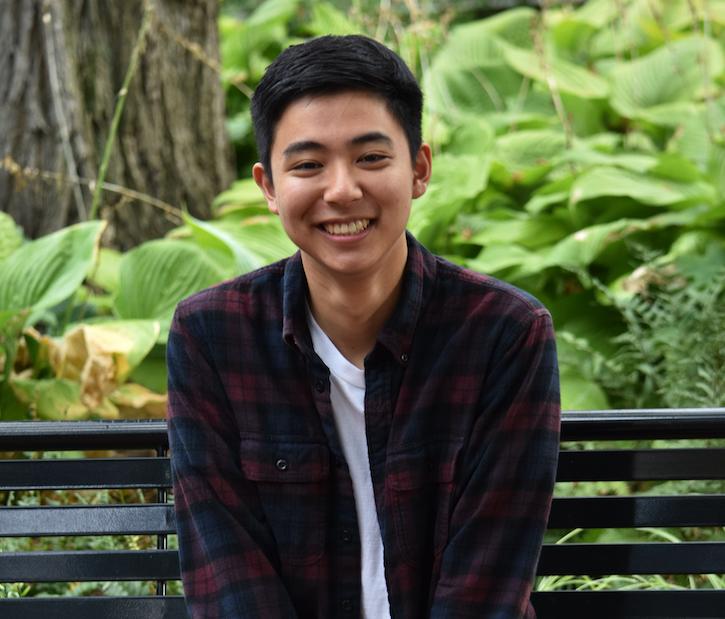 Kalos Chu '23 is a junior at Harvard College studying English with a secondary in Art, Film, and Visual Studies. He’s a journalist and screenwriter interested in pursuing a career in feature animation. This past year, he interned at Nickelodeon Animation Studios and DreamWorks Feature Animation. Most recently, he helped found the On Campus chapter of Harvardwood.

Q. What inspired you to start Harvardwood on Campus?

A. This past year, I took a gap year and did a lot of work in the entertainment industry. I had to cold email many people and seek out tons of resources on what it takes to break in, and I realized that there weren’t necessarily that many Harvard resources where I could do that. There was OCS, and several upperclassmen that I knew of, but there wasn’t really a central place where people could get together and talk about these things with their peers.

And shortly after I started to break in, I did virtual Harvardwood 101, and I thought: "Wow! This is exactly what I was looking for! It’s everyone on campus who is somewhat interested in entertainment! Why doesn’t this group exist during the rest of the year?"

Shortly after that, someone from Stanford Students in Entertainment reached out to me and asked me to speak on a panel, and afterward I spent time speaking with their president and learned more about their on-campus group — which gave me the information and context for how to start a group like that at Harvard!

And even beyond all of the educational/logistical benefits, I think there’s value in having a place for peers to connect — to celebrate successes, to complain about failures, and to just have friends who are going through the same thing.

A. I came to Harvard wanting to study English, and sort of settled on one of two career paths - journalism or education. I had never considered entertainment seriously even though I really enjoyed movies, for the many reasons people don’t consider it: ‘it doesn’t make money’, ‘nobody can make it’, etc.

When the pandemic hit, it threw all my plans out the window. We were sent home, and it felt like the whole world was on pause. Also during this time, my father passed away from a five-year battle with cancer. There was a lot of turbulence, and it really made me reflect on what I valued and what I wanted out of life. And right at that time, I watched the Disney+ series Into the Unknown which is about the making of Frozen II — and I had this epiphany: “Oh my God, this is what I want to do with my life: I want to make animated films.” What struck me was how much everyone cared about what they did and the time and effort they put into the work and how much they enjoyed it. That was so infectious, and it made me realize that’s what I want to do.

Q. What did you do then?

A. I thought, "Okay, where the heck do I start?" I literally went through the credits of Frozen II, looked up everyone on LinkedIn, and cold emailed about 100 people! Something to the effect of “Hey, you don’t know me, but I would love to talk about your job for about 30 minutes on Zoom if you have time”. Of course, 90% of them ghosted me, but about 10% of them got back to me, and I got tons of helpful advice. I also talked to as many Harvard alumni in the industry as I could find, and listened to whatever podcasts/read as many books as I could. I just tried to learn as much as possible. Then, during my gap year, I interned at a few live action production companies in the fall, interned for Nickelodeon’s Creative Development department in the spring, and DreamWorks’ Feature Development department in the summer.

Q. What was your biggest takeaway from your DreamWorks internship?

A. Of course, I learned tons about the animation pipeline, about how the development process works, and what makes for good storytelling. But beyond all that, I also got to really understand a company’s culture. We were online the whole time, and it’s probably much harder to understand a culture virtually, but I think I was able to talk to a lot of people, not only in my department but from all corners of the company. From writers to recruitment to technical people, it gave me a sense of what kind of company DreamWorks is and how it’s different from other animation studios: How much people care about the community, why people come back and stay there for their entire career, and what they value.

Q. What are you interested in doing once you graduate?

A. This is going to sound weird because I have no art skills, but I’m interested in feature animation, in either becoming a development executive or a producer. Post-graduation, I’m thinking of either going into development or production as an assistant and working my way up from there.

Q. What storytellers and/or content creators do you admire and why?

A. I feel like I have so many of them! Domee Shi, the story artist at Pixar who directed Bao. I remember watching that in theaters before Incredibles 2 and being absolutely astounded. It was amazing, so universally touching, but at the same time, it was specifically relevant to me as an Asian American. It gave form to something that I felt and that my family had felt. It resonated with me on such a deep level that I wrote her a letter — and she wrote back!

Another creator I admire is Alan Yang. He’s a Harvard graduate who is a writer and producer on Parks and Rec and Master of None. He wrote and directed a movie called Tigertail which I really enjoyed, I thought it was a beautiful movie. (Here’s a link to a review I wrote of it!)

Q. What do Harvard and Harvardwood do best in preparing students for a career in entertainment?

A. Harvardwood does a great job with programming. The weekly newsletters and events are so great, especially during the pandemic. Being able to have all these panels online, it was like a gold mine of information. Harvardwood 101 is amazing. The fact that it brings together everyone that’s interested in entertainment is in and of itself invaluable.

I think what Harvard does well is give you the soft skills needed for the non-technical roles — that ability to communicate and connect with people. You meet all sorts of people here and that really helped me learn how to present myself professionally but also interact in a relatable way. What I’m excited about with Harvardwood on Campus is bringing together the students more, so that you meet those that are coming up alongside you and create those relationships that you carry through your career.

A. This sounds really cliché because everyone says it, but my family really inspires me. My father and my mother were both born in China and immigrated here. They built a life for themselves and had to go through things that I will never have to go through. Their ability to do that makes me feel that I can do anything. Often at DreamWorks, when I was stressed out with work, I would take a step back and remember that at the end of the day, my job was making cartoons and telling stories. Looking back at my family and what they went through always reminds me that I’m in a privileged place to be able to do what I do.