Benefits of Partnering with Harvardwood

Harvardwood has almost 6,000 members as of January 2015. Harvardwood grows at an increasing rate each year, as more students and alumni discover the vast array of resources available to them through this organization. Harvardwood has grown at an average of 16% over the last 3 years. Currently, the membership is made up of: 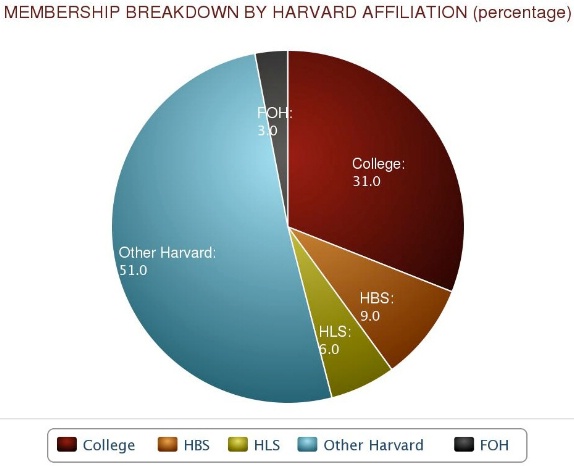 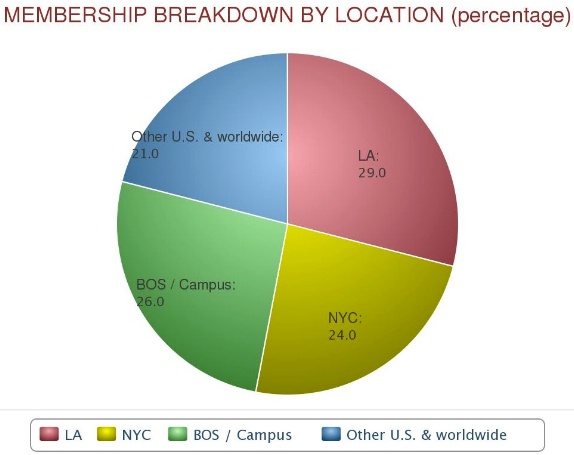 Harvardwood is home to several programs and events that aid in the career development and education of our members, including:

Harvardwood also provides public service opportunities and grants for our members through Harvardwood Helps and the Harvardwood Heroes program, which awards grants to Harvard-affiliated individuals who perform work at the intersection of the arts and community service.

“I got my first break when I responded to a ‘comedy writers wanted’ ad posted on Harvardwood…That classified ad ultimately led me to a staff writer position on a new kids’ sitcom…I couldn’t be happier with the new job, and I’ll be forever grateful to Harvardwood for providing me with that first opportunity.” – Teresa Hsiao

“Harvardwood is quite a resource! We’ve been inundated with applications and resumes for the position…we are happily overwhelmed with talented candidates.” – Jocelyn Stamat

“Harvardwood put me in touch with my first internship in Hollywood, Echo Lake Entertainment. Echo Lake was not only a pleasant and educational place, but it also became the place where my first relationships with young filmmakers in LA were formed.” – Roy Cohen

“I would 100% recommend Harvardwood 101 to anyone interested in the industry. I learned so much. I met new people, and they were all fantastic!” – Pooja Venkatraman

Corporate partnerships may include some of the following benefits:

✓ Company logo and link featured on the Harvardwood sponsors page

✓ Company logo and link featured in the Harvardwood Career Center

✓ Monthly or yearly sponsor of all Harvardwood newsletters

✓ Early access to winning scripts from the Harvardwood Writers’ Competition

✓ A program ad for Harvardwood’s biggest event, Harvard in Hollywood, and admission tickets

✓ An opportunity to host a special, in-person recruiting meeting for Harvard students during the January 101 program, the Summer Internship Program, or on-campus

✓ Sponsorship of a Harvardwood event or program of partner’s choice, which would include the opportunity to present company materials and admission tickets

✓ An advertorial in the HARVARDWOOD HIGHLIGHTS, written in an editorial tone to speak directly to the Harvardwood membership

Additional benefits may be discussed and tailored to fit the partner's needs. Packages are designed to suit the budget and goals of any organization seeking to build a relationship with the Harvardwood community.

Each week, Harvardwood compiles a list of its most recent website postings and sends them out to the membership. Sponsors that post job opportunities or event listings will have their posting arrive in the inbox of eager Harvardwood members worldwide in the Weekly.

interest, member announcements & testimonials, and a profile
piece spotlighting a prominent Harvard alum in the arts, entertainment, or media.

Finally, event and program sponsors may have the opportunity to be featured in dedicated email blasts that go out to the entire Harvardwood membership base.

Harvardwood organizes dozens of major events each year featuring world-class speakers and panelists from across the entertainment industry and the broader Harvard community. Major events include Harvard in Hollywood, the Harvardwood Film Festival, Harvardwood Presents, and the Harvardwood Speaker & Seminar Series.

On average, Harvardwood receives close to 7,000 unique visitors and about 22,000 impressions per month (source: Google Analytics). Sponsors with their logos placed on the Harvardwood website will be seen by a growing number of Harvard alumni each month. Furthermore, Harvardwood has a strong social media presence on LinkedIn, Twitter, and Facebook, adding new friends and followers every day, through which sponsor partnerships with Harvardwood will be announced and promoted.

Past and Current Sponsors

Our partners are successful, recognizable companies that want to: 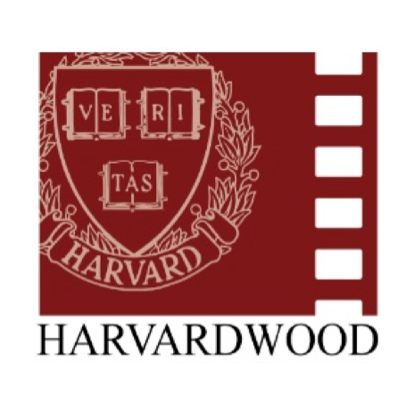 Created in 1999, Harvardwood is a nonprofit organization for members of the Harvard University community who believe in the power and purpose of the arts, media, and entertainment. By providing professional resources and service opportunities, Harvardwood strives to utilize the creativity and leadership of our diverse members as forces for positive social change.

Harvardwood coordinates career-enhancing and community-building programs and events for its members around the world, including on- and off-campus activities for current Harvard students. Additionally, Harvardwood has an active online community, including a website, alumni directory, and various email lists through which over 5,600 members worldwide can send and receive information regarding career-related issues, social events, classified ads, and other areas of interest.