Harvardwood Presents Jodie Adams Kirshner '99 on BROKE: Hardship and Resilience in a City of Broken Promises

"After reading the poignant, heartbreaking, defiant pages of BROKE, no one should question the need for a moral referendum on how policy is created in and for urban America" - Michael Eric Dyson 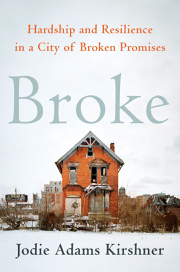 "A powerful answer to anyone who believes that austerity and job cuts are a necessary path to prosperity.  At turns, heartbreaking, enraging, and inspiring" - Andrew Cockburn, Washington Editor, Harper's Magazine

BROKE is the urgent narrative of Detroit's bankruptcy and its aftermath.  Kirshner asks, "How could policymakers hype bankrupcy as the solution to struggling cities without understanding the efficacy or basic consequences of its use?"  In BROKE, Kirshner follows seven Detroiters as they navigate life during and after their city's bankruptcy.  Reggie loses his savings trying to make a habitable home for his family.  Cindy fights drug use, prostitution, and dumping on her block.  Lola commutes two hours a day to her suburban job.  For them, financial issues are mired within the larger ramifications of poor urban policies, negligence on the State and Federal levels, and the root causes of a city's fiscal demise.

BROKE was named a November must-read by Salon and it has just been announced as a finalist for the J. Anthony Lukas Book Prize.

Jodie Adams Kirshner is a research professor at New York University. She also teaches bankruptcy law at Columbia Law School.  She is an elected member of the American Law Institute, past term member of the Council on Foreign Relations, and a technical advisor to the Bank for International Settlements. Until 2014, Kirshner was a law professor at Cambridge University, where she was deputy director of the Cambridge LLM program, deputy director of the Cambridge Centre for Corporate and Commercial Law, and a fellow of Peterhouse College.  Kirshner received her undergraduate degree from Harvard College and graduate degrees in law and in journalism from Columbia University.

The doors will open at 6:30 pm (please do not arrive earlier) and the evening will begin with a wine and cheese reception. The talk will begin promptly at 7:00 pm.

An independent bookseller will be present to make copies of BROKE available for purchase, and a booksigning will follow the talk.

Advance registration is REQUIRED.  No tickets will be sold at the door.

Special thanks to Fross Zelnick Lehrman & Zissu P.C.
and to Andy Goodwin and the Plymouth Hill Foundation