Join us in congratulating Juliette Boland, currently a junior at Orange County School of the Arts! Founded last year, the aim of the Harvardwood Prize is to recognize and celebrate the artistic accomplishments and potential of high school students who exemplify our mission. Given Harvard University's robust arts communities and arts education opportunities, the Prize is meant to encourage high school students to apply to Harvard College and is awarded annually to a high school junior (rising senior) who will apply for admission to Harvard in the upcoming fall and who has demonstrated excellence in their dedication to the arts/media/entertainment and its power to enact positive social change. 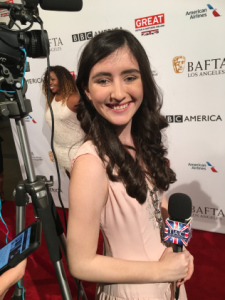 Juliette Boland is an award-winning journalist for The Anglophile Channel, a worldwide streaming network dedicated to British entertainment, and a junior at Orange County School of the Arts in the Musical Theatre conservatory.

As the host of The Timey Wimey Fandom Show, Juliette became the youngest recipient ever to be honored by The Los Angeles Press Club with the National Arts and Entertainment Journalism Award for Best Entertainment Reporting, beating out college journalists in several categories.

Juliette has been seen on many high-profile red carpets, including Pre-Emmy Award/Pre-Golden Globe Award events for BAFTA/LA, Oscar Celebrations for British Consulate Los Angeles, The BAFTA Britannia Awards, Britweek, Comic-Con, and a multitude of press junkets and film premieres. Her interviews have included legendary industry veterans such as: Sir Kenneth Branagh, Dick Van Dyke, Peter Fonda, as well as the casts of many hit shows, including The Crown, Stranger Things, Sherlock, Doctor Who, and Supernatural.

As a junior at the very competitive Orange County of School of the Arts, Juliette has excelled and shined in many areas. As the Vice-President of “Watch What Happens OCSA” (the school’s web-show featuring students and their talents) Juliette has brought an unprecedented amount of experience, for someone so young, in the areas of producing, filming, editing and hosting. She is also a member of the Thespian Honor Society and was honored with a Superior rating at the California State Thespian Festival for her solo performance in the Musical Theatre category. Honor societies include: National Honor Society and California Scholarship Federation.

Juliette attributes her easily adaptable personality to the fact that she spent a majority of her early life on the road with her entertainer parents. At the tender age of two-months old, Juliette—with passport in hand—began accompanying her parents on their international travels aboard many luxury cruise lines. Juliette’s early education was spent being schooled around the world and, as a result, gave her exposure to and an appreciation for different cultures and customs which she holds dear to this day.

Juliette currently hosts, produces, writes, and edits her own webseries dedicated to fandoms and recaps popular television shows such as BBC’s Doctor Who. Juliette was invited to the set of the BBC show Poldark to cover the show and participate as a performer. She is also a newly recruited writer for the Los Angeles Times High School Insider. She enjoys volunteering through Assisteens of South Bay, a philanthropic organization, and her favorite charity is Bloom Where Planted, which provides clothing and school supplies for children to attend school and receive an education in under-served areas of Africa.