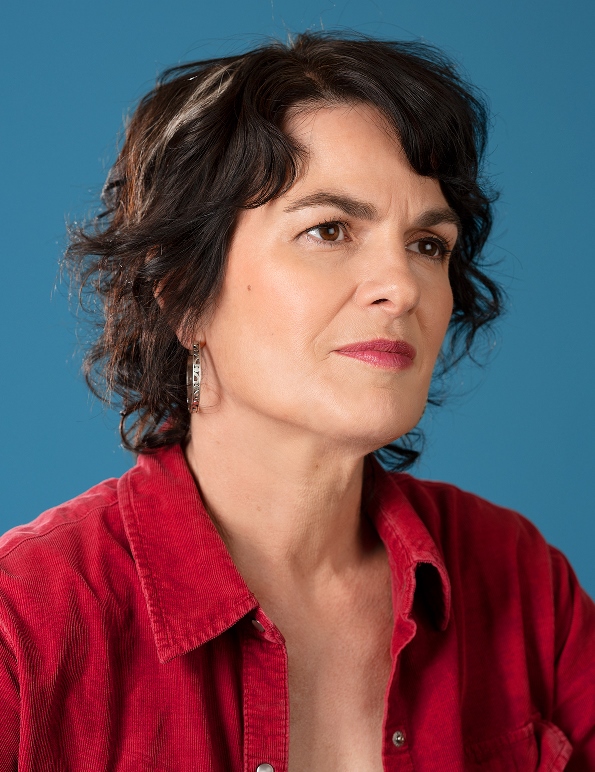 When the opportunity arose to direct Jennifer Lopez in a documentary about her decades-long career spanning across three fields, Amanda Micheli AB '94 was working as a creative director at Masterclass. Though Amanda has a long history as director and cinematographer of award-winning independent documentaries, she took her position with Masterclass for the increased security she sought after becoming a mother. “Independent film doesn’t support a baby… but documentary was [still] tugging at me,” Amanda recalls. So, directing the JLo documentary Halftime, which recently premiered on Netflix and has since reached an audience of many, many millions, was the perfect chance for Amanda to dive back into her own production.

When the project kicked off in 2019, it was on a proposed schedule of about six months. Over two years later, Halftime had become an extended COVID project for Amanda and the team. The project morphed from the original pitch of following Jennifer with a camera for a week from the Super Bowl to the Oscars to an exploration of her 50th year and a look back at what shaped her into the artist, performer, and icon she is today.

Upon beginning the project, Amanda found that she bonded with Jennifer in an unexpected way: over being athletic kids. “We bonded over being childhood tomboys and her love for running. That’s when it clicked for me: Jennifer is an artist and a mother, but she’s wired like a jock, and even more so like a fighter. I wanted to find out: what is she fighting against? What fuels her insatiable work ethic? As a female filmmaker navigating motherhood and the second half of my own career, I felt this was an incredible opportunity to explore this iconic and seemingly bullet-proof superstar on a more human level.” Jennifer’s story embodies what Amanda has often explored as a filmmaker: “women bucking the odds in a male-dominated world.”

Following Just for the Ride, her 1995 Harvard thesis film which explored the world of rodeo cowgirls, she released Double Dare, a documentary about the struggles of two Hollywood stuntwomen “to stay working, stay thin, and stay sane.” Four years later, she earned an Academy Award nomination for La Corona, which follows inmates competing for the crown in the annual beauty pageant of the Bogota Women’s Prison. Her more recent Emmy-nominated documentary, Vegas Baby, follows families vying for free IVF in a social media contest.

Amanda insists that she was not always strategic in career. “I just followed the stories that interested me,” she says, “[and] it’s been a forensic journey to look back and observe that I’m really drawn to stories about outsiders.” She explains that she’s pulled towards “people who love doing something but aren’t remunerated for it; they’re at the bottom of the totem pole.” She’s also driven by exploring the nuance of female identity and self-esteem. “If you’re not rewarded in the culture for what you do, how do you come up with a sense of self?” Amanda inquires. “Even successful women struggle with this. When I met Jennifer Lopez, I was shocked to learn that even she feels like an outsider in Hollywood. That was a big part of what drew me to the project.”

As a self-proclaimed tomboy, which ultimately led her to a stint on the USA National Women’s Rugby Team, Amanda felt that she didn’t always fit in herself. “I was the photo editor of my high school newspaper. I used the camera to cope and fit in,” Amanda says. “Documentary has afforded me a passport to meet other people from all walks of life.” This type of thinking carries over into Amanda’s work even today. “It’s all about empathy and trying to get a view into a slice of life that you wouldn't normally see, and trying to walk in someone else’s shoes,” Amanda explains. “I’m not an explicitly political filmmaker, but our country has been so divided in these last 5-10 years, more than ever I feel it’s critical to make work that helps create empathy.”

When watching or creating a documentary, Amanda is looking for a compelling narrative, not just for information. “Show me a world, or a story,” she says. Amanda was always drawn towards storytelling, and while non-fiction has been her mainstay, she has begun to develop scripted projects as well. Amanda said while she feels the tools are the same in fiction and non-fiction – character, setting, story – the process can be wildly different. “Writing on a blank page can feel lonely and intimidating,” Amanda describes, “while a documentary puts you out with people, looking for stories in the real world.… The biggest difference is, you can’t tell people what to do in a documentary because they’re not actors,” Amanda laughs. “You have to be really patient or you end up with a forced narrative. It can be challenging to allow events to unfold in such a way that you have cohesive and emotional narrative.”

The differentiator in documentary post-production, Amanda says, is “you’re scripting and writing in the editing room. And contrary to starting with a blank page, in docs you are always distilling down.” As a result of this, documentary can be a long game. Amanda’s longest project, Double Dare, took almost a decade to release. “It seems like most documentaries take two years no matter what,” Amanda confirms, adding, “The landscape now is really fruitful. When I started, documentary wasn’t cool, and now it’s cool. But it’s still a labor of love.”

When asked what advice she has for young filmmakers, she repeats a pithy quote handed down to her by a legendary stuntman: “They don’t call it show friends, it’s show business.” Making films is no small financial undertaking, and Amanda urges young filmmakers to keep that in mind. But more importantly, she encourages young artists to “Really try to align with your purpose and why you want to do it, because there’s a lot of people making films, and it’s competitive out there,” Amanda says. “It sounds like tough love, but if it doesn't need to be a movie, don’t make it a movie!” She also advises aspiring filmmakers to develop a craft other than directing. “Look where the need is. Sound recordists are always in demand. Make yourself indispensable,” Amanda says. “You learn so much more about the business and the craft by trying out different sides of it.”

When asked what she’s planning to work on next, Amanda smiles and states that her plans are to “continue to challenge myself, and continually question and realign my purpose as a filmmaker, and have a good time doing it.”


The documentary Halftime is now available on Netflix.